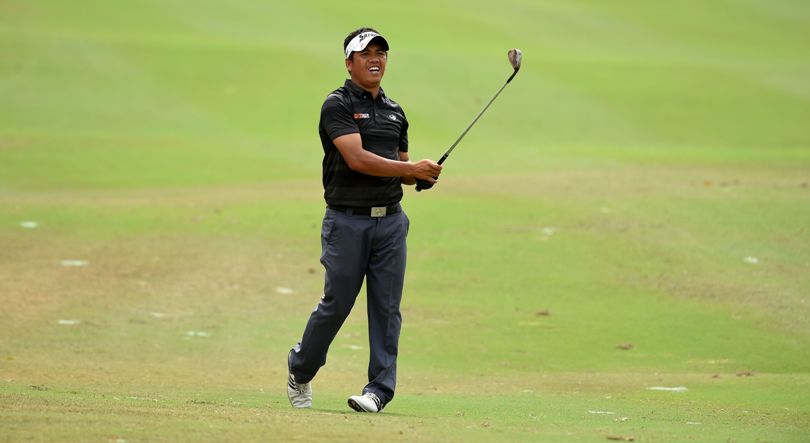 2012 Asian Development Tour (ADT) Order of Merit champion Jay Bayron of the Philippines opened with a superb five-under-par 67 to lead by two shots at the US$100,000 Aboitiz Invitational on Wednesday.

Bayron, who won a total of three ADT titles including the inaugural Aboitiz Invitational in 2011, fired seven birdies against two bogeys to put himself on top of the leaderboard at the Wack Wack Golf and Country Club’s East course which has proven to be a true test of golf with only nine players breaking par in the opening round.

“My short game was very good. I like this course a lot. It suits my game. I have got some good finishes here before so I feel really comfortable out there. My best birdie was on the 16 where I putted in from about nine yards!” said the 37-year-old Filipino, who has notched five top-10s on the ADT so far this season.

The 36-year-old Dumandan, who has won six times on the domestic circuit but not on the ADT, said: “I am lucky today. I missed only two fairways. My driving was good. I just try to avoid missing the greens out there. I will stick to my game plan and be patient.”

Paez, playing in his first year in Asia, was also ecstatic with a 69. “I bogeyed the first but I managed to hit fairways and greens after that. When I didn’t have a chance on the greens, I relied on my short game. My game plan worked,” said the 27-year-old American, who traded five birdies against two bogeys.

“Playing on the ADT is good for my game because it helps me get accustomed to the climate here in Asia. It is also a good practice for me. I will try not to think too much about leading. Hopefully my score will stand. I will try and play with no expectations,” added Paez.