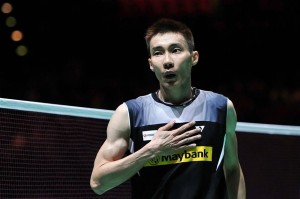 * Chong Wei begins his comeback trail with a smashing win

The Lee Chong It was stunning performance from the Malaysians in their opening Group D match in the Sudirman Cup mixed team event in Dongguan, China on Sunday when they scalped second seeds South Korea 3-2 to clear their first hurdle.

With the Datuk Lee Chong Wei aura vibrating in Dongguan following his eight-month suspension for doping failing a doping test during last year’s World Championships in Copenhagen in August, Malaysia kick started their campaign with a winning start when Goh V Shem-Tan Wee Kiong upset World No 1 Lee Yong-dae-Yoo Yeon Seong in a three-set thriller, prevailing 20-22, 21-14, 27-25 in a 78 minute thriller.

Then came Chong Wei’s much awaited return to competitive badminton after an eight-month suspension. With his world ranking dropping to No 46, the 32-year-old Malaysian was up against Lee Dong Keun (No 34) but he showed no rustiness in his game as he got about his badminton craftiness on the work in his 21-12, 21-10 win in 44 minutes.

The fans cheered the Malaysian as his name was announced on the PA system and he did not fail to acknowledge them at the end of the match. The Chong Wei aura was on full display but women’s doubles Vivian Hoo-Woon Khe Wei were not able to ride on the momentum and lost their match to Chang Ye-na-Jung Hyung Eun 20-22, 21-9 in 41 minutes.

With the score tied at 2-2 it was left to Chan Peng Soon-Goh Liu Ying to deliver the winning point and they did it in style with a 23-21, 21-13 win over Korean hope Ko Sung-hyun-Kim Ha Na. The Malaysians ranked No 70 defeated the Korean, ranked No 8, in 44 minutes to give Malaysian badminton a big boost for Monday’s match against India.

“The pressure was on the Koreans to deliver the first point,” said V Shem after the win.

“Hopefully we will be able to keep our momentum in Dongguan. This is a team event and winning the first point is always important and we are glad we did it.”

Chong Wei, said getting the feel of the tournament after the long layoff from competitive badminton, is vital but “the Malaysians team spirit is simply fantastic. It contributed to our win over the Koreans,” said the former World No 1.