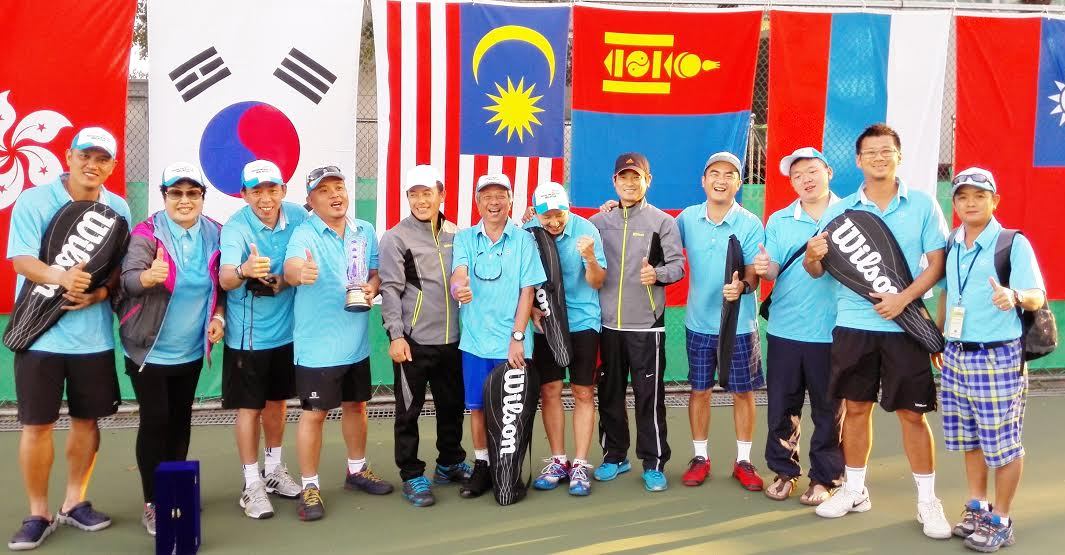 Malaysia team under the invitation of Korea Tennis Sports for all Association played in Jeju island recently.

The Malaysian team under the flagship of Sabah Tennis President Johnson Koh comprise of 12 players were invited to participate in the 7th Jeju International tennis sports for all tennis competition for the first time through a Korean Sabah resident Mary Kim who played for KK Frenz in the 1 Msia Rosmah Mansor Trophy in September this year.

The players are 2 from Sabah, 3 from Sarawak, 5 from Peninsula states  and 3 Koreans residing in Kota Kinabalu.

There were 14 teams from 8 countries all over the world: Hong Kong, Taiwan, Mongolia, Russia Canada, Inner Mongolia ,Malaysia and host Korea.

Malaysia played Guilin of China in the first round lost 1-2. Beat Mongolia 3-0. Beat Russia 3-0 to enter the quarter finals.

In the quarters Malaysia beat Inner Mongolia 3-0 to set up a semi final match with China Helong Province. Malaysia is the underdog, however Johnson Koh partnering Gilbert Yeo from Sarawak created an upset that shackles the Helong team to win 2-1. Johnson & Gilbert upset Helong’s top pair who is younger in combined age by 6-4.

In the finals Malaysia had to meet Guilin again as they also gain through the  round  robin to reach the finals.

This time around Johnson and Gilbert although the 3rd ranked pair were fielded as the first pair to meet the top Guilin pair.

As luck turned out this pair who were 1-3 down clawed back when Johnson changed his tactics to counter  the young aggressive  pairs play. He lobbed and dropped so accurately that the Guilin pair lost confidence and control of the match to lose 6-3. That upset boosted the Malaysian pair of Leuk  Khen and Brandon Wong  to clinch the champions trophy with a 2-1 win.

Malaysia’s first time entry to this prestigious international tennis tournament played on a one set no deuce basis to win was a very fantastic fete. All the teams admired Malaysia’s fighting spirit and team cooperation.

On top of the icing Mary Kim captures the women’s doubles individual title partnering  a drawn partner from all the players. The men’s individual doubles random combination from different countries  was won by a Taiwan and Canadian Chinese pair.