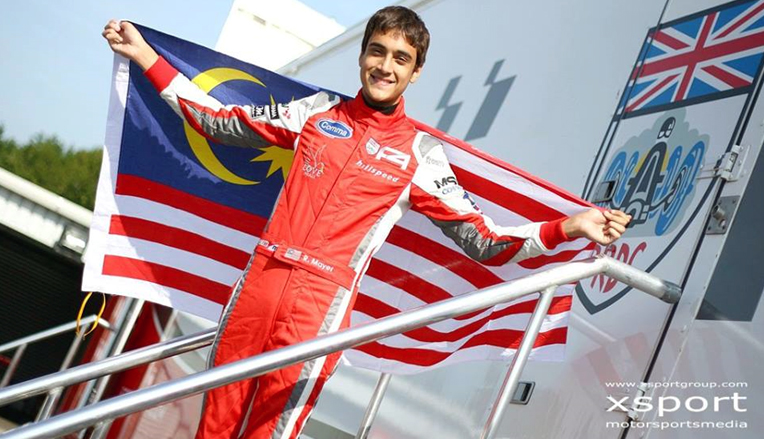 Young Malaysian racing driver Rahul Mayer is gearing up to be trained like a Formula 1 driver after being selected to join the prestigious McLaren Performance Academy.

The newly designed MPA-14 programme will be delivered at McLaren’s UK headquarters in Woking. Building on the success of the 2013 Performance Academy, this year’s course will see an expanded programme for the selected young drivers. The Academy, provides an initial three day bootcamp of intense training and assessments followed by further support and workshop programmes throughout the year, it offers expert advice from professionals within the McLaren Mercedes Formula 1 team.

“I am really honored to be selected for this fantastic opportunity and as a young Malaysian sportsman I am eager to grab this once in a lifetime opportunity. As I go into my second season racing in UK’s BRDC Formula 4 Championship, I’m really looking forward to putting my new skills into practice, it will really help me reach new levels in my racing performance. I can’t wait to get started,” commented an excited Rahul.

Speaking about the Performance Academy, Clayton Green, Manager of the Human Performance Programme said: “McLaren Applied Technologies was delighted with the success of the 2013 Performance Academy and the overwhelmingly positive feedback from the young drivers who attended. Drawing on McLaren’s unparalleled knowledge and expertise in the field of Formula 1 and performance measurement, the Performance Academy is well-placed to inform, train and inspire the next generation of motorsport champions.”

McLaren Mercedes driver, Kevin Magnussen, said: “As one of McLaren’s past young drivers, I’ve got first-hand experience of the team’s expertise in driver development. Whether it is guidance on nutrition, race preparation or physical fitness, McLaren’s human performance specialists have made a real difference to my progression as a driver, and contributed a great deal to where I am today. The Performance Academy is a unique opportunity for young drivers to tap into the knowledge and experience of Formula 1 experts at a world-famous team.”

The first session of the 2014 Performance Academy, was run between 14th and 16th March, which included a series of educational workshops and physical training sessions that offer a one-of-a-kind insight into the blend of technologies, knowledge and best practice that drive motorsport success.

After the session Rahul commented that it was a wonderful experience to get into the world of Formula 1 and experience with McLarens its long history of competitiveness and successes in Formula 1. He was extremely excited when given the opportunity to have a pit stop tyre change experience on a McLarens Formula 1 car, which was part of the training.

Rahul is now preparing for his first race in Formula 4 which will be held at the Silverstone GP Circuit on 26th and 27th April 2014. On his thoughts and targets, Rahul said “My first year in Formula 4 was a steep learning curve for me. Racing in Europe is so different in terms of competition and etiquette compared to Asia. It’s a whole new ball game and there is no better place to improve as a racing driver then in Europe. After all the knowledge that I have gained, my targets are to be in the top 10 for most of the races this year and achieve a good position in the championship.”

Here’s wishing Rahul all the best from Sports247.fm