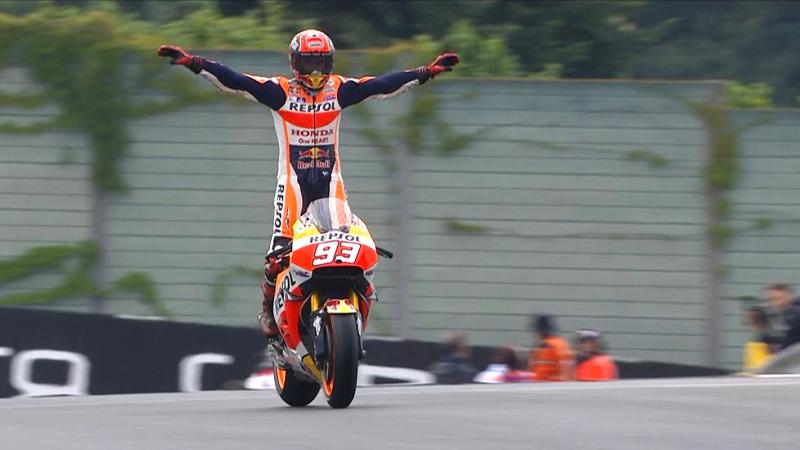 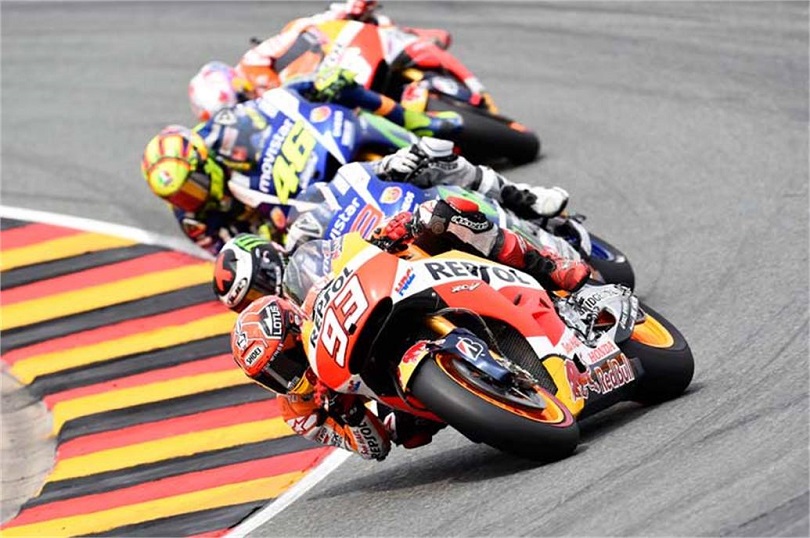 Spain’s Marc Marquez doubled his lead at the top of the MotoGP championship after the Honda rider roared back from a slow start off pole position to win the German Grand Prix on Sunday.

Second in testing conditions at the sodden Sachsenring circuit, which was pounded with rain for much of the day, was Britain’s Cal Crutchlow and third Andrea Dovizioso of Italy after they enjoyed a tussle.

It was a miserable day though for Marquez’s championship rivals with Jorge Lorenzo, the reigning champ, finishing down in a lowly 15th for just a single point and Valentino Rossi eighth.

Marquez, who celebrated wildly after the race, almost doubled his lead on Lorenzo as he closes in on a third title. He jumped up to 170 points overall, with his fellow Spaniard now lagging in second on 122 points.

Rossi, the Italian legend, is third on 111 points, with half the races in the season now gone and the riders heading off on a summer break for a month before the Austrian Grand Prix.

“I could not imagine (that I would be this far ahead), it is great,” the brilliant 23-year-old Marquez said, beaming broadly.

“I opened the gap in the last two races (he was second last time out in Assen) and I am in good confidence after a good first half of the season.

“Now I will have some quiet and go to the swimming pool.”

Marquez, for whom this was a stunning seventh victory at Sachsenring, gambled with his tyres — and it paid off handsomely in the end.

He was unable to match the pace of the leading riders as the race began in the wet and fell down to fifth and was struggling.

He came off the track at Turn 8 but was able just about to stay upright and on lap 17 he entered the pits for slicks — it was a move that would take him to the race win.

With the track drying up, his lap times immediately surged to four seconds faster than those on wet tyres and with just six laps to go Marquez grabbed the lead before pulling away.

Earlier, Johann Zarco also surged clear at the top of the Moto2 championship when the Frenchman surged to victory in soaking conditions, as his nearest rivals crashed out.

The reigning world champion pipped fellow Kalex rider and home hope Jonas Folger to the line, with the Spaniard Julian Simon third on the podium, in the ninth race of the season.

Zarco’s thrilling victory — he was just 0.059 seconds ahead of the German — was his fourth win this season and propelled him to 151 championship points.

Second in the standings is Spain’s Alex Rins, who suffered a heavy crash that ended his race with only three laps to go when riding in third. He walked away from the smash.

Pawi is 10th in the Moto3 standings, 105 points behind South African leader Brad Binder, only eighth in Germany. – Agence France-Presse