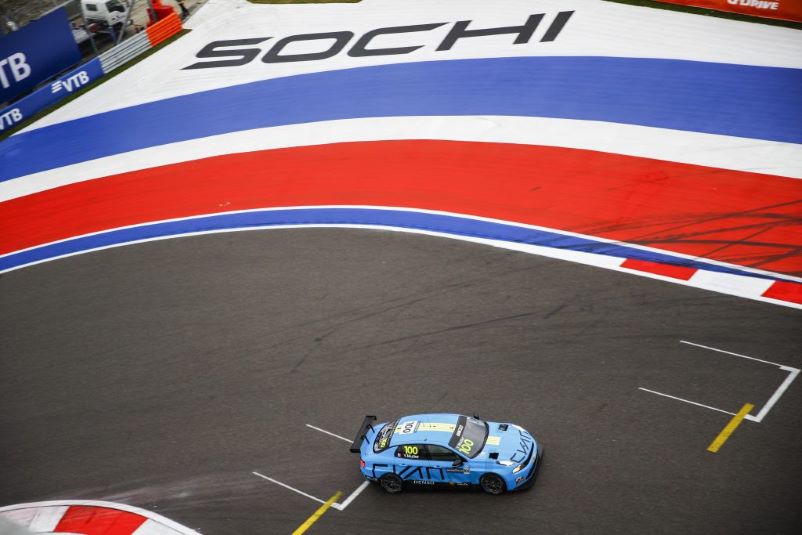 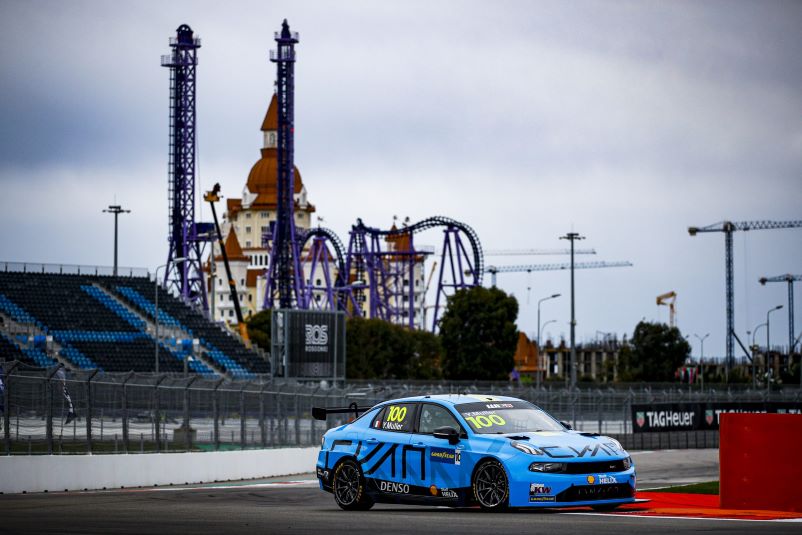 CUPRA-powered Azcona back on form in second place, Girolami third in Münnich Honda

The Cyan Racing Lynk & Co driver was fastest in the opening Q1 session, then proved quicker than Zengő Motorsport’s Mikel Azcona (CUPRA Leon Competición) in the Q3 shootout. Meanwhile, Goodyear #FollowTheLeader Yann Ehrlacher played it safe to qualify fifth and extend his advantage over nearest rival Frédéric Vervisch by one more point to 37 ahead of the final two races of the 2021 WTCR − FIA World Touring Car Cup.

Muller sets Qualifying Q1 pace, frustration for Tarquini
The greasy and difficult track conditions following late morning rain proved a headache for every driver as they made calls on running full wets or slick Goodyears on the front and treaded tyres on the rear as Q1 began. The honour of topping the 20-minute opening session went to four-time World Touring Car champion Muller. Mikel Azcona appeared to have knocked him from the top, only for the Frenchman to hit back with his final effort to score the first five points of the weekend. Behind Azcona, the other three Q1 points scorers were Santiago Urrutia, Rob Huff and Nathanaël Berthon.

Title rivals Esteban Guerrieri and Ehrlacher missed out on points, but easily made it through to Q2 in sixth and seventh, while Vervisch − second in the standings heading into the weekend − saved himself from falling out at the first hurdle. He managed to end the session in P10 with a late switch to wet-weather Goodyear tyres all round, ahead of Nobert Michelisz and Néstor Girolami who was the last to graduate to Q2 in P12.

Of those who missed out, Attila Tassi was closest in P13, ahead of Jordi Gené, whose Zengő Motorsport Drivers’ Academy team repaired his CUPRA Leon Competición in time to take part following his accident in Free Practice 1. But Gabriele Tarquini was disappointed to miss the cut in his last weekend before retirement, the Italian only setting a time good enough for P16. “It was not the qualification I wanted to do for my last one,” he said. “I tried to do my best, but in these conditions I was not fast. With the compensation weight we have we are struggling, but I can do better than this. I was far away from Q2.”

Ehrlacher progresses from Q2 with fastest time, Magnus takes all-important P10
Conditions remained tricky to read in the 10-minute Q2 session as the track began to dry. But Ehrlacher proved full wets was still the best choice by setting the pace and making it safely through to the Q3 shootout. He was joined by Berthon, Girolami and Muller, who almost out-fumbled himself out of the reckoning. Muller didn’t set a lap until the final seconds, but jumped straight up to fourth after a late tyre change to full wets. Azcona was fifth to also make it through to Q3.

That meant Guerrieri was eliminated from the shootout in sixth, with Huff, Vernay and Vervisch next up. Like Muller, Gilles Magnus hadn’t set a time until the last moments − but his last-gasp effort pushed him into P10, ahead of Urrutia and Michelisz, which means the Belgian will start the partially reversed-grid Race 1 from pole position in his Comtoyou Audi RS 3 LMS.

Muller reigns in the rain
Drops of rain before the Q3 shootout added further jeopardy for the final five. In the circumstances, Ehrlacher sensibly chose to run first in case the rain increased. The 2020 King of WTCR turned in a neat and tidy lap to set a benchmark of 2m31.887s.

Berthon was the next to run in his Comtoyou Audi. The Frenchman was far quicker than his careful countryman, going faster by a whopping 1.6s.

Now Muller took his turn. Was it emerging that instead of running early, running late was better as track conditions improved? Muller’s lap suggested so, given that it was a significant 0.661s faster than Berthon and 2.263s up on his nephew’s effort.

Azcona was the fourth to run. The Spaniard was down on Muller in the first sector, but fastest of all in the second − but lost speed in the final sector to end up second, 0.348s down on the Lynk & Co.

That left Girolami as the last to go. The Honda driver managed a decent lap, but didn’t have the pace to threaten Muller and was third fastest of the five. That left Muller on pole position for Race 2, ahead of Azcona, Girolami, Berthon and Ehrlacher.

“It was a big lap,” said a delighted Muller. “An amazing qualifying. I was quick in Q1, but my first effort in Q2 was not good enough and I had to come in to change tyres and just make it into Q3. We made a set-up change and did a good lap, so well done to the boys.”

Azcona was happy to be back in Q3, especially after suffering a fuel pump failure in FP1. Meanwhile, Ehlacher was satisfied as he eyes the big prize tomorrow.

“It started raining after Q2 when I had done a mega lap that didn’t count for points,” he explained, regarding his decision to run first in the shootout. “The main thing was getting into Q3. Now we are well placed, not to win but to score good points in both races. We have to be spot on tomorrow.”

Race 1 at WTCR VTB Race of Russia is scheduled to start at 12h15 local time on Sunday with Race 2 due to begin at 14h15. Click HERE for how to watch live.

Yvan Muller (Cyan Racing Lynk & Co, Lynk & Co 03 TCR)
“That was a good lap, but when I started my lap I had a doubt because in Q2 I struggled to do a good lap. I was quick in Q1. Q2, I had to stop to change tyres and go again, and I just came in the top five at the last second. I drove as best I could. I did a small set of changes before the Q3 which helped me a lot and then I drove without mistakes and that made a good lap. The main goal is to win the teams’ championship first before anything else. But we took a lot of points already today about this and then we have to confirm. I also hope we can confirm the drivers’ title for Yann. And if there is something else, if I can finish in the top three of the drivers it would be nice.”

Mikel Azcona (Zengő Motorsport, CUPRA Leon Competición)
“It was not my best start of the day. We had some technical issues in the first free practice, which I didn’t have much experience of the track. It’s a new track for me, almost for everyone. So luckily in free practice two we went for wet conditions and in qualifying I really like these conditions when it’s wet and it’s changing conditions. I tried to do everything, the car was working really good in those conditions. It’s true that in dry conditions we are struggling a little bit compared to the other cars. For me it was really good, these wet conditions. During qualifying, Q1, Q2 and Q3 we were trying to improve the car. We did some changes and also the car was improving, which I’m really happy about. I feel really good after a bad start to the day. Still tomorrow there are two races for the final races and I really want to be battling for the podium positions and why not the victories? I am coming from two very difficult weekends, so for me it’s everything.”

Néstor Girolami (ALL-INKL.COM Münnich Motorsport, Honda Civic Type R TCR)
“First of all I would like to send all positive thoughts and energy to Marcela Bertolisi who was working for Eurosport Events. She died two weeks ago. She was always smiling and I will remember her always like that. So all my positive thoughts to her family. Regarding the day, it was quite complicated for us. We knew in this situation with this long straight our performance is not so good, so free practice one we were far away, then in free practice two with damp conditions we started to pick up the pace and started to fight for the top 10. And Q1 was not an easy shot for me, I just passed in P12. To be honest the track changed a lot from FP2 to qualifying, so we were doing some changes from Q1 to Q2 and this made the car much better and I understood how to drive faster, take that opportunity to be in Q3. That was the main target, to be in front of Esteban’s rivals who are Vervisch and Ehrlacher. So tomorrow we have a very good starting position to at least fight for both titles. I think in the teams’ title we are far away, but Esteban is still fighting for the drivers’ championship, so full focus on tomorrow. I will do my best, trying to help him as much as possible.”

WHAT’S NEXT?
The deciding rounds of the 2021 WTCR season, WTCR VRB Race of Russia, take place on Sunday November 28 as follows: