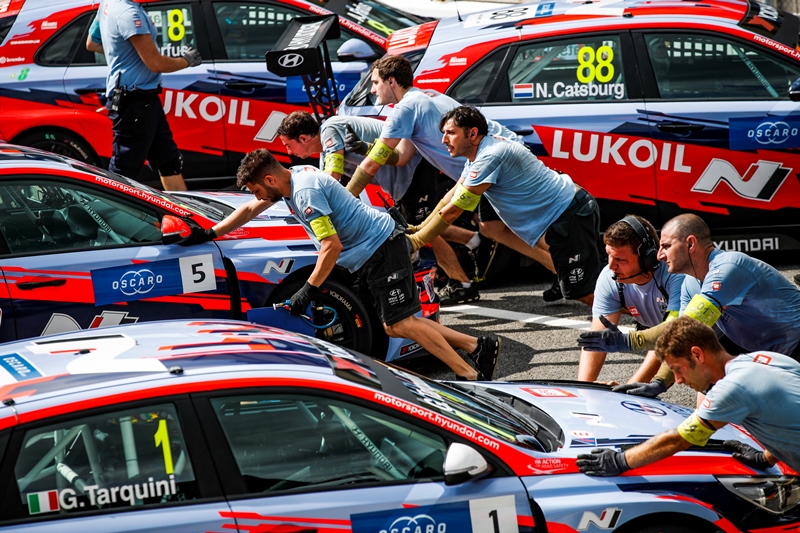 Norbert Michelisz will defend his WTCR – FIA World Touring Car Cup title in a Hyundai Motorsport Customer Racing-built i30 N TCR, one of four drivers set for an all-season campaign with Hyundai power.

Michelisz, from Hungary, will continue his long-term alliance with Italian Gabriele Tarquini with the WTCR title winners past and present flying the flag for BRC Hyundai N LUKOIL Squadra Corse.

Having made one WTCR appearance as a wildcard in Slovakia and one as part of the BRC Hyundai N LUKOIL Racing Team line-up in Macau last November, Germany’s Luca Engstler has secured a full-time graduation to the top-level TCR category following considerable success at national and regional level.

Dream team continues WTCR glory chase
Confirmation that Norbert Michelisz and Gabriele Tarquini will continue their Hyundai-powered partnership for a third season extends a link-up that has netted a combined 13 WTCR wins and 1146 points in the series for the BRC Racing Team from Italy.

“I really work well with BRC and with Gabriele as my team-mate,” said Michelisz, 35. “That shows in the results we have had for the last two seasons. Of course, 2020 will be a new challenge. There are new circuits and new [Goodyear] tyres for everybody on the grid. I’m sure the other drivers are working hard to be ready for the season, but we are also pushing for the start of the year. I know I have the title, but I know we can be faster in 2020.”

Having sacrificed his own title defence to help Michelisz to the 2019 WTCR crown, Tarquini is back for what is set to be his 15th full season in FIA World Touring Car racing.

“Norbi and I have been very quick for the last two years, and the success we’ve had shows that,” said ex-Formula One racer Tarquini, 58. “For me, personally, the aim is to compete for wins regularly again and challenge for the overall crown at the end of the year. But we also have to look at the Teams’ standings as well. We’ve finished second the last two years, so it would be great to finish 2020 with both titles at BRC for the first time.”

Rookie set to rise: Engstler steps up full-time with family team
Having won myriad TCR titles at national and regional level, 20-year-old Luca Engstler will embark on his first full season of WTCR racing. The German, a graduate of Hyundai’s Junior Driver initiative, will drive a Hyundai Customer Racing-supported i30 N TCR for his family team, Engstler Motorsport, which is entered under the Engstler Hyundai N Liqui Moly Racing Team banner. Dutchman Nicky Catsburg, who scored 166 points with Hyundai power in 2019, will drive a second entry.

“Joining the WTCR grid is really a dream for me,” said Engstler, whose father Franz was an FIA World Touring Car racer for seven seasons. “I have to thank Hyundai Motorsport Customer Racing. As part of their Junior Driver programme last year I was able to take advantage of some of their knowledge and learn from Norbi, Gabriele and Nicky. Then they trusted me to drive in Macau last year which was a great experience and something that should help me for this season. Hopefully I can repay some of the support they’ve given me and help keep the i30 N TCR at the front of the WTCR field in 2020.”

Catsburg in podium push
Having missed out on a WTCR podium in 2019, Nicky Catsburg has high hopes for his second campaign. “I’m excited for a second season in the series, and with a new team,” said Catsburg, 32. “Engstler Motorsport have a lot of experience and success with the i30 N TCR around the world and, of course, before that as well. Hopefully together we can add to that story this season. I really enjoyed driving the Hyundai i30 N TCR in FIA WTCR last year. The series has some of the best racing, and best touring car drivers in the world and is incredibly competitive on track in every session.”

No place like ‘home’ for Hyundai-powered quartet
The Hyundai-powered WTCR quartet will take centre stage when the WTCR – FIA World Touring Car Cup visits South Korea for first time with the Inje Speedium circuit set to host the action from 16-18 October. “It’s a very nice track, enjoyable with up and down sections, like a small version of Mugello in Italy,” said Tarquini, who has completed several demonstration laps at the track. “When I drove there, it was complicated to find the line and this made it a good challenge. It will be good for our category of racing.”

More WTCR success expected
“The Hyundai i30 N TCR already has a fantastic record in WTCR competition, and the line-up of customer teams and drivers [in] 2020 means that should continue for the coming season,” said Hyundai Motorsport Customer Racing Operations Leader Andrew Johns. “BRC Racing Team and Engstler Motorsport are two of the most successful TCR squads in the world so to have them both as Hyundai Motorsport customers is great. Had it not been for the cost cutting measures put in place for this year, it would not have been possible to be able to have two such strong teams in the series.”