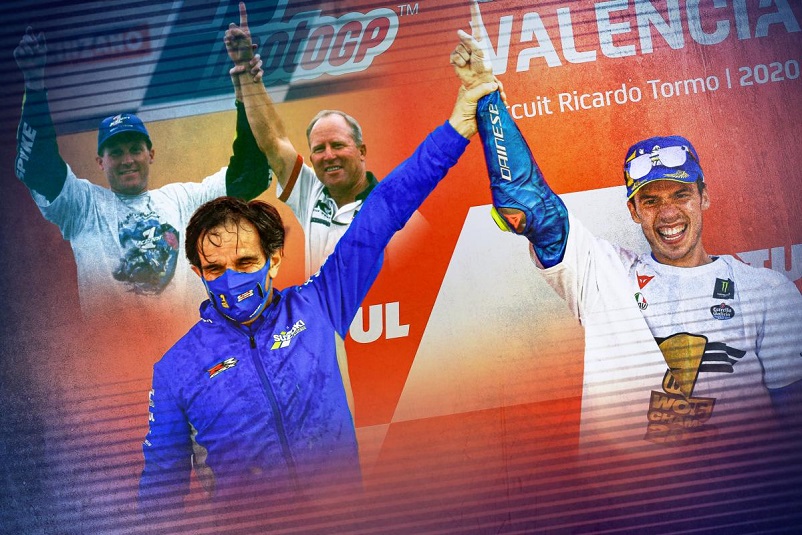 2020 is a year that will go down in history for many reasons. Both on and off track. But for Suzuki, it couldn’t have gone much better. In their 100th year anniversary year that was signalled by a classy silver and blue GSX-RR paint job on both Mir and Alex Rins’ bikes for the MotoGP™ campaign, the Hamamatsu factory went on to become World Champions for the first time in 20 years.
20 years since Kenny Roberts Jr. claimed the 2000 500cc World Championship, the last time Suzuki have been kings of the motorcycle Grand Prix world.
Four victories in Malaysia, Jerez, Catalonia and Motegi and five other podiums at Suzuka, Donington Park, Sachsenring, Estoril and in Valencia for the American saw Roberts Jr. beat reigning 250cc World Champion and rookie Valentino Rossi by 49 points that year, becoming the first son of a former World Champion to win the title.
It’s been a long wait for Suzuki, but they’re finally back on top. And in doing so, Mir joins an illustrious list of premier class Suzuki World Champions: Barry Sheene, Marco Lucchinelli, Franco Uncini, Kevin Schwantz and Kenny Roberts Jr.

And already phenomenal season can get even better for Suzuki in Portimao. The Rider and Team Championships are now wrapped up and in the hands of Mir and Team Suzuki Ecstar, with Petronas Yamaha SRT now 79 points behind with 45 left on the table. Now, it’s a straight-up fight for the Constructor crown between Suzuki and Ducati at the Algarve International Circuit, with Yamaha having an outside chance still.

Hamamatsu vs Bologna, Japan vs Italy. Suzuki and Ducati are on 201 points apiece. Whichever bike takes the chequered flag first, that’s who’ll claim the Constructor title, with Yamaha needing a disaster from both Suzuki and Ducati to salvage something from the season. If Suzuki do manage it, the coveted MotoGP™ Triple Crown will be theirs.