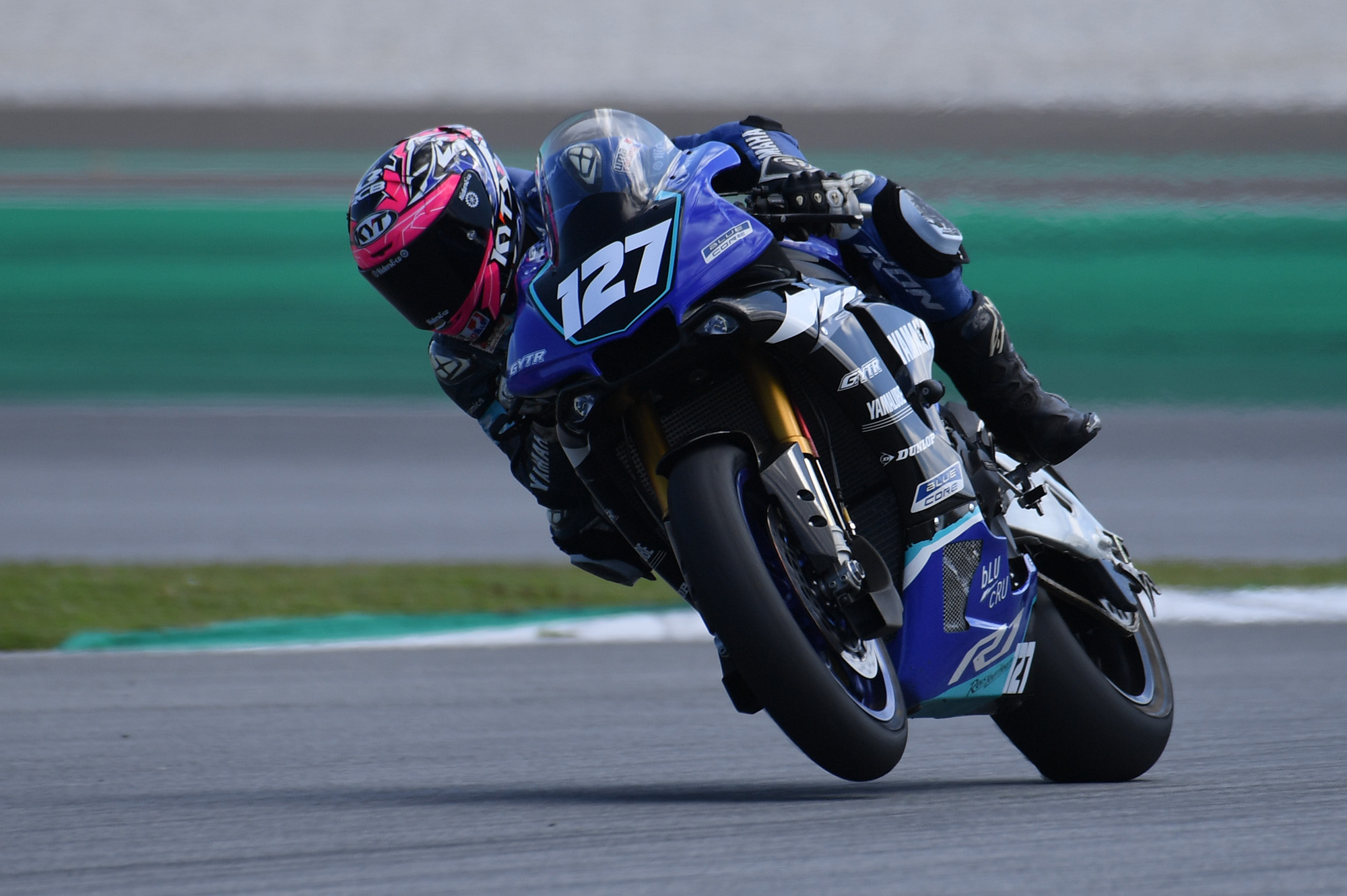 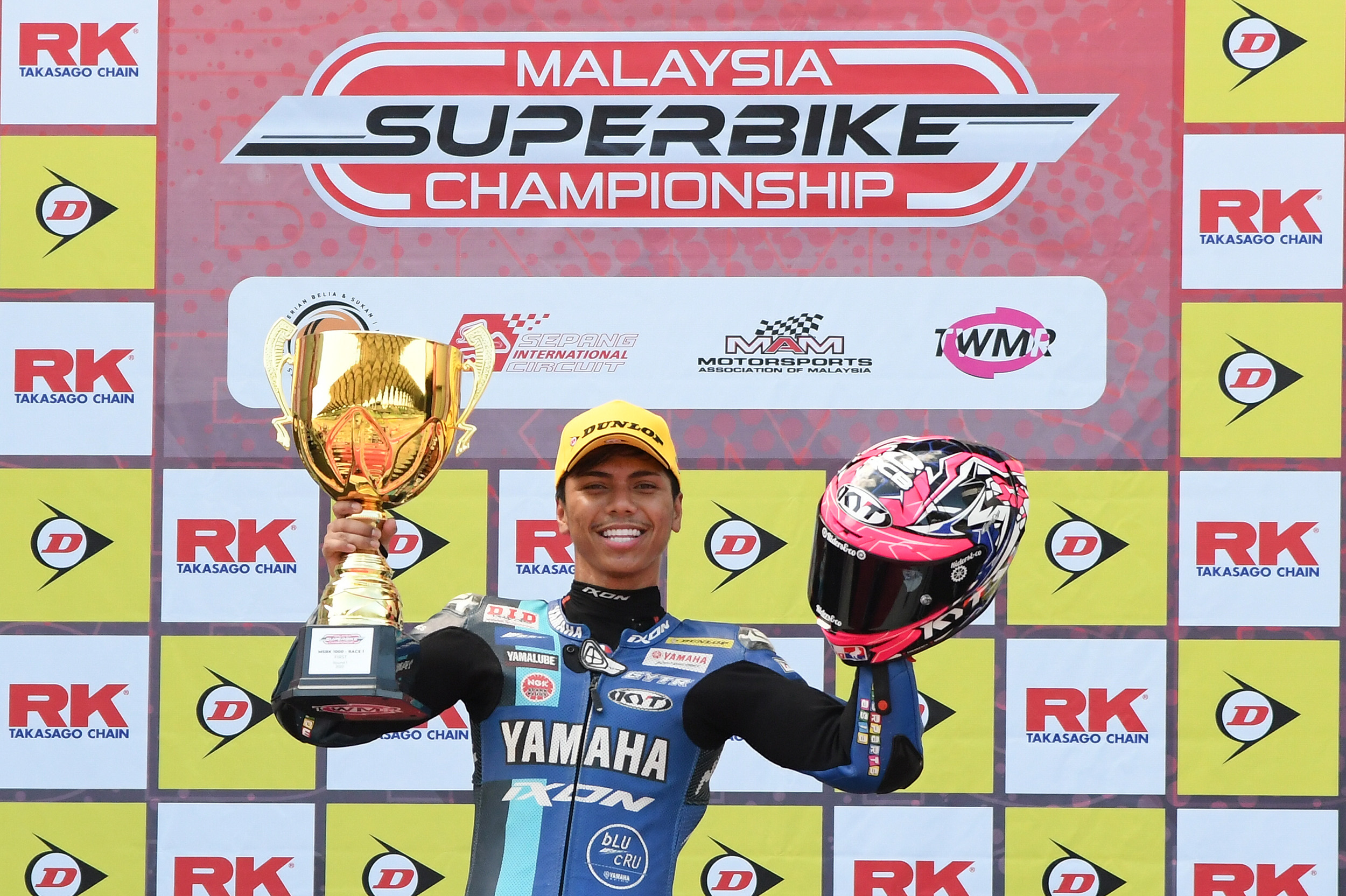 Kasma Daniel Kasmayuddin of YAMAHA GEN BLU RACING TEAM was applauded at the season opener of the Malaysia Superbike Championship as he grabbed the first win in MSBK1000 A Class.

It has become a breeze for Kasma who never fails to impress. Kasma, who obtained the fastest time during free practice yesterday also went on a good start this morning (Saturday) when he clocked in fastest in the qualifying session. Taking his stance at the pole position, Kasma posed unbeatable when he circled the circuit with great confidence.

Throughout the 10-lap race, Kasma never faltered even for a moment as he charged far ahead of the trail which portrayed his immense experience and manoeuvring ability. Kasma was fastest at 21’31:844s.

Commenting on the win, Kasma said, “While I am thrilled with this win, I have a bigger challenge ahead of me which is the FIM Asia Road Racing Championship which will be held in Sugo. This race also serves as a training platform for me to better enhance my performance for the coming Asian race.”

“With this race, I am also able to identify the right setup of the machine needed while fine tuning my riding abilities. This achievement is definitely a boost to my confidence and I am pumped up for the coming challenge.”

Coming in at the second spot was Azlan Shah Kamaruzaman of the HORIZON RACING TEAM, clocking in at 21’42:494s.

Meanwhile, for the MSBK1000 B class, Khoo Chee Yen of MOBILUB SUZUKI RACING TEAM took the lead with the highest points in hand when he finished fastest at 23’18:273s.

CY Khoo has been quite the name in the MSBK Championship since his participation. In Round 2 of last season, he took the top spot on the podium with the most points.

While CY Khoo did not make the fastest time during the practice session and clocked in at 2’17:144s during the qualifying session, he proved his prowess when he completed the 10-lap fastest.

Commenting on the race, CY Khoo said, “Race 1 was good and luck was on my side. I had the opportunity to strengthen my position when someone crashed ahead of me. That gave me better timing.”

“For Race 2 and Race 3, it is a long weekend so we have to stay consistent. Hopefully, that would help us attain a good position.”

Coming in at the second highest points was Muhd Syukri Mat Zoki of ESRA RACING TEAM. He clocked in at 23’29:484s. 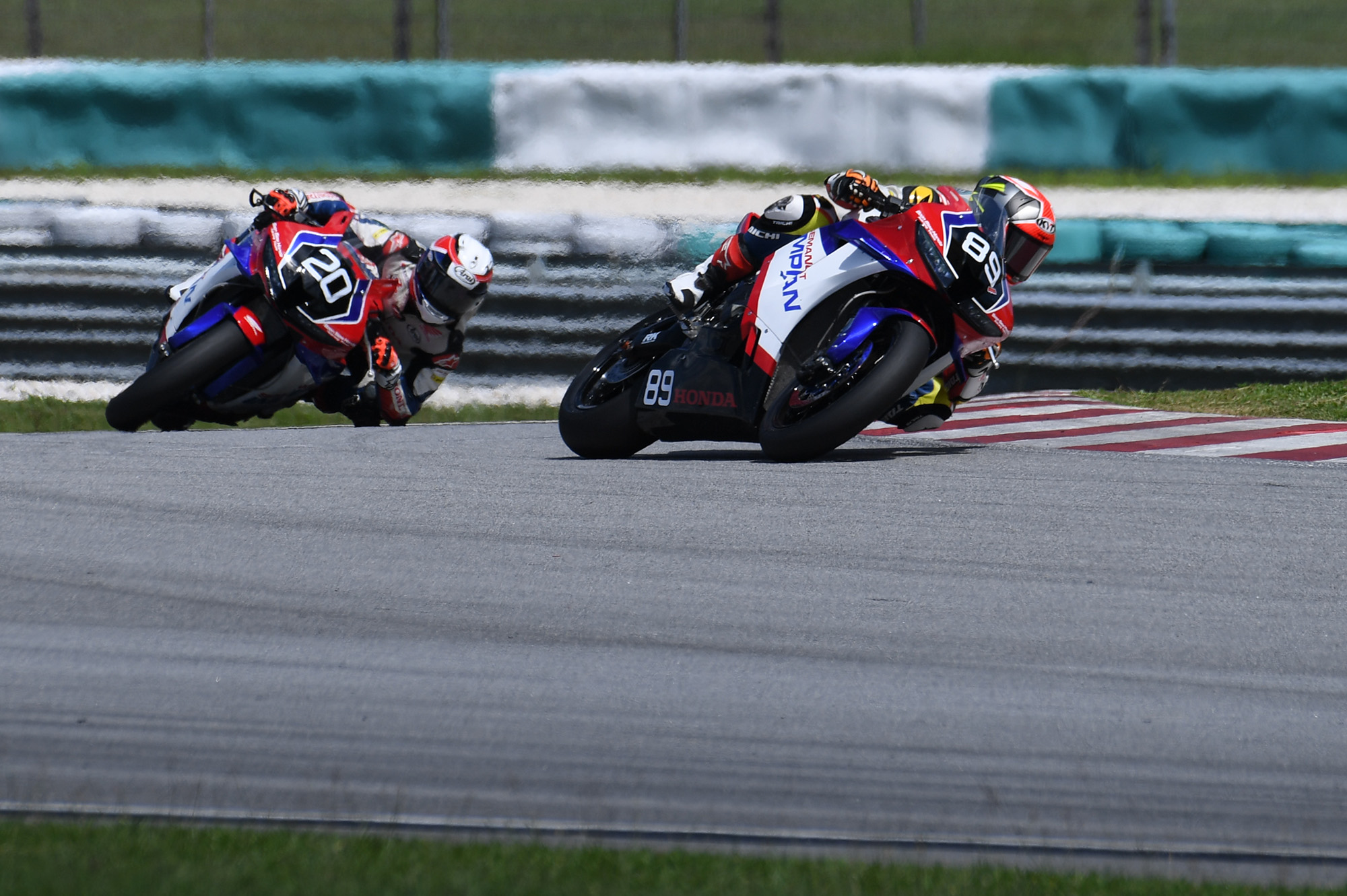 The season opener has been a fruitful one thus far with a good practice session the day before for Khairul fondly known as KIP. He also took the pole position on the grid when he completed the qualifying session with his fastest at 2’09:726s.

Throughout the race, KIP kept on to his momentum, consistently. While the first five laps were favourable with the much-needed gap from his teammate, Azroy, he was soon challenged when Azroy pulled in closer behind him.

By the seventh lap, Azroy’s diligence to take the lead pushed him ahead of Khairul. It was then the beginning of a heated race between the duo. While they glided in and out of P1 and P2 at the corners, the neck-to-neck battle kept everyone at the edge of their seats at the final turn as the equally dextrous riders gambled upon the speed of the Honda CBR600RR towards the finish line.

Khairul boasted victory when he finished first clocking in at 21’53:773s.

Commenting on the race, “It was quite a good start for me especially in the first few laps. It gave me ample gaps from the next in line. However, after the fifth lap, I noticed Azroy getting closer to me.”

“Initially, it was tough to push through so I kept consistent with my pace. The turns gave me opportunities to glide in and out but it was not until the last turn that I found the right moment to push further. I managed to overtake right after and take the winning spot.”

Coming in third was Muhd Ibrahim Mohd Norrodin of SIC RACING team who made it at 21’58:191s. 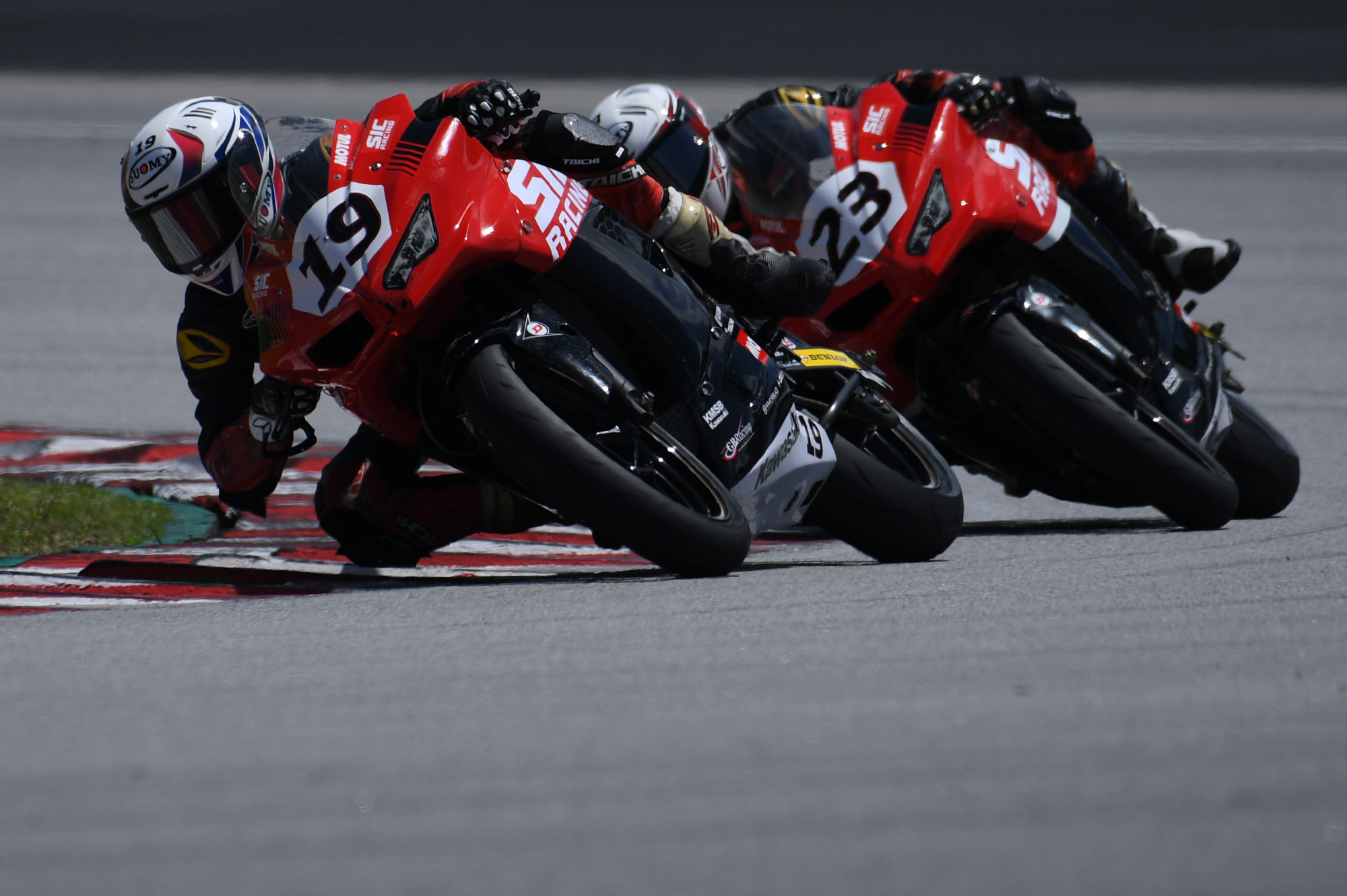 As for the MSBK250 A Class, Muhammad Farish Hafiy Farid Sezli of SIC RACING took the top spot on the podium.

The 8-lap race began with Farish taking the lead at the pole position at 2’31:321s after the qualifying session. The race witnessed his ride that kept him steadily grounded at P1 before he was overtaken by his contender in the seventh lap.

However, Farish was determined to get back ahead and he found the opportunity when unfortunately, his rival had a fall. Farish grabbed the P1 before successfully completing the race at his fastest.

Commenting on the race, Farish said, “The race went well and I am thankful for this win. Mid race, I was challenged by Irfan nevertheless, at the last lap, he made a mistake and I managed to stride back into the lead position. I will do my best for the remaining races.”

Farres Putra Mohd Fadhill who took the second spot on the grid completed the race second when he logged in at 20’19:498s.

Coming in third, their teammate Emir Idzhar Ezuan who finished his fastest at 20’19:568s.

For the MSBK250 B Class, Muhammad Fauzi Hasan takes the lead with the highest points when he emerged fastest.

Fauzi took the 8th spot on the grid when he completed the qualifying session at 2’46:382s. Throughout the race, Fauzi handled his machine and speed consistently.

Although he was challenged by his counterparts, Fauzi managed to steer the wheels of his machine to a good finish clocking in at 21’51:936s.

Commenting on the race, Fauzi said, “I tried to find an opportunity to do better during the qualifying session however it was to no avail. Thankfully, I had some luck during the race to do better.”

“For tomorrow’s race, I hope it does not rain. With that, keeping my fingers crossed that we could maintain the same position.”

The rider came out of nowhere towards the lap last with a striking move to create a historical moment that would make him the first winner of the newly established class.

The class saw a pack of 30 riders moving closely around the circuit in a bid to grab a shot on the podium. Adie, who began at the 15th spot on the grid made it to the top three position in lap 3 but was later consumed by the riders in a highly competitive stride.

Commenting on the race, “It was a tough ride. I kept pushing myself to break into the compact space in between the riders. Finally, on the last lap, I found the opportunity and I grabbed it.”