Home 2021 Officials and Players heap praises on Matsuyama, predict next golf rush in... 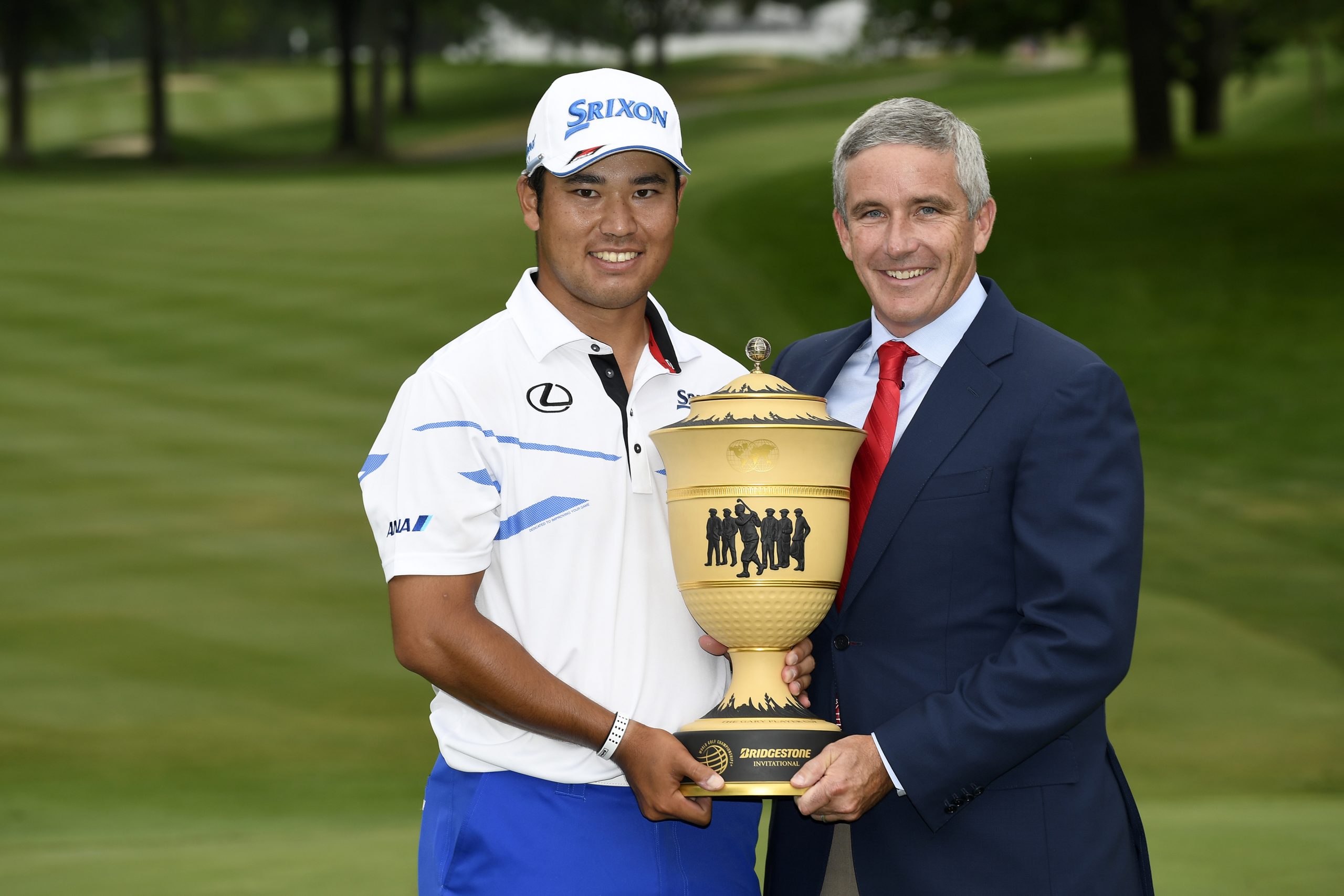 Officials and fellow competitors poured deserved praise and adoration on Japan’s history-maker Hideki Matsuyama, whose nail-biting victory at the Masters Tournament on Sunday was tipped to spark a new wave of talents emerging from Japan and Asia for decades to come.

The 29-year-old Matsuyama became the first Asian male golfer to triumph at Augusta National, capturing his first major victory and sixth PGA TOUR title during a year when Tokyo will host the rescheduled Olympic Games later in July where golf is part of the programme.

PGA TOUR Commissioner Jay Monahan said: “On behalf of the PGA TOUR, our congratulations to Hideki Matsuyama on becoming the first Japanese-born player to win a major championship with his Masters Tournament victory.

Already Japan’s leader in career PGA TOUR wins, Hideki has carried on a rich legacy paved by Isao Aoki, Jumbo Ozaki, Shigeki Maruyama and others. His historic win will inspire so many in his home country and around the world and coincides perfectly with this summer’s Olympic Games in Tokyo where he will undoubtably be a central figure.”

There are already calls for Japan’s golf superstar to be given the honour of lighting the Olympic Games cauldron during the opening ceremony, although the often-reticent Matsuyama responded in typical fashion: “It would be quite an honour.

But I’m not sure about my schedule. If the schedules worked out and I am in Japan when that happens and they ask me, what an honour that would be.”

As Asia’s second male golfer to win a major after Y.E. Yang’s triumph in the 2009 PGA Championship which, together with K.J. Choi’s eight TOUR wins led to a sharp rise in the number of Korean golfers competing on the PGA TOUR, many expect Matsuyama’s dream victory to provide a similar springboard for the game in Japan and Asia.

This times nicely with recent reports on the sport gaining some new-found momentum in its growth and increased participation globally.

Tiger Woods, who is recuperating from injuries sustained in a car accident in February, tweeted: “Making Japan proud Hideki. Congratulations on such a huge accomplishment for you and your country. This historical @TheMasters win will impact the entire golf world.”

Golf legend Jack Nicklaus, who holds an unprecedented 18 major victories, has followed Matsuyama’s career rise closely after the Japanese talent secured his first PGA TOUR victory at the Memorial Tournament presented by Nationwide in 2014, a tournament which he hosts.

“I’ve been blessed to spend a lot of time in Japan and I know they love the game of golf. They’re also very proud people and they’re even prouder today! I competed against the great Isao Aoki, and know how revered he was and is. Hideki will also now forever be a hero to his country. I was able to watch every shot & Hideki played beautifully. He kept cool & calm … the day and moment belongs to Hideki Matsuyama! This is a great day for him, for Japan, and for the global game of golf!”

Australian Adam Scott, a former Masters winner, has known Matsuyama since taking him under his wing when the latter featured in his first Presidents Cup in 2013. He was not surprised to see Matsuyama breakthrough at Augusta National.

“He’s a bit like a Tiger Woods to the rest of the world, Hideki in Japan,” said Scott. “He’s obviously developed a lot. He’s continued to win, and he’s won at least one World Golf Championships event, I believe, if not two. I think he goes through his process very well and seems to have a pretty level head on his shoulders. He’s quite an intense character, actually, even though we don’t really see that, and obsessive about his game. The crowds in Japan are fanatical is the best way I can describe them. I remember I took the green jacket over there in ’13 when I went, and it was an incredible response I got, so I can only imagine what Hideki will experience.”

Annika Sorenstam, a 72-time LPGA Tour winner and now president of the International Golf Federation, also believes kids will start emulating Matsuyama in Japan in her congratulatory tweet to Matsuyama. “Congratulations to #HidekiMatsuyama, the first Asian born player to win @TheMasters. With the @NBCOlympics going to Japan later this year, their countryman’s win will be sure to inspire young golfers throughout Asia,” Sorenstam wrote on the social media platform.

Korean-American, Kevin Na, who lost to Matsuyama in the Memorial playoff all those years ago, expects to see more Japanese golfers streaming to the PGA TOUR. He said: “I know Y.E. Yang won the PGA Championship, the first Asian-born player to win a major, and then first Asian-born to win the Masters, it’s a big deal. It would be huge for Asia.”

As a child, Matsuyama idolised Woods and watched the American legend win the 1997 Masters on TV and later dreamed of competing at Augusta National, which he realised after winning the 2010 Asia-Pacific Amateur Championship. In nine appearances prior to Sunday, Matsuyama missed only one cut, posted two top-10s and three other top-20s.

“Hopefully I’ll be a pioneer in this (winning the Masters) and many other Japanese will follow. I’m glad to be able to open the floodgates hopefully, and many more will follow me,” said Matsuyama.

Congratulations Hideki Matsuyama on a phenomenal @TheMasters win. A terrific achievement for you and for Japan.

I think it’s really good for the game of golf globally. He’s a great young player who inevitably was going to win major championships. I know it’s his first win in quite a while, so I can also relate to that. I can only imagine, if he closes this out, how that’s going to feel.

No one really wants to talk about how much pressure is on him. You look at the media that follows him. You look at what he’s done in his career. He’s a top ranked player with a ton of pressure on him, and that’s the hardest way to play. He’s able to do it, and he’s the first countryman to win the tournament, a major championship. Everyone was hoping and thought he was going to win one a long time ago, and he kind of lost a little bit of form. I know his team relatively well, and he kept working hard through all of it. So big kudos to him and his team. I’m sure a lot of people are having some beers over there.

What a win! Hideki you did it! Time for all of us to step up. So happy and so proud of you my friend! #asiarising #gointl #masters #greenjacket

Congratulations to my @presidentscup teammate, Hideki Matsuyama, for winning

Hideki is obviously quiet. You know, he’s doing his own thing, but it’s all down to business when it comes to the golf course. He’s a fun guy. He’s all around just a great player, and when he gets it sort of dialled in like he did that back nine yesterday, he backs himself a lot, and he hits the shot that needs to be hit. I think it’s time for someone that side winning a major, and it’ll be great for Hideki and for his country. The Japanese people are great people, and they love their golf. You know, I think it’ll be a great thing for his country.

It will be quite ironic because 10 years ago, when I won the green jacket, he was low amateur. So he was sitting next to me when I was at the presentation. He’s just a great player. I’m sure he’s shown us all over the last 10 years that he’s been out here that, when he gets going, he’s a guy that feeds off confidence. He sets high expectations. When he’s got confidence, (it’s) straight at every flag, and he seems to pull them off too. It would be huge for Asia.

Seeing Hideki winning Masters is not only great for Japan, it is also great for Asian golf.

He was actually very funny (during the 2019 Presidents Cup). I mean, he doesn’t know much English, but we had a great time. He was a great team player, obviously great player, and I think he’s got his game where he wants it to win. He can win any week. He’s one of the guys that I feel like he obviously should have won more with his ability. He’s been out here for a while now, and he’s still very young, but he’s a cool guy. He’s got a lot of talent, and he’s got everything to win here and really anywhere. When I was there for the ZOZO CHAMPIONSHIP (in 2019), the people watching him and Tiger (Woods) was – it was like a major. So for him to get this ‘W’, it’s huge for Japan. I had no idea how big the following was of golf down there, and it was amazing. It would mean the world I’m sure for all the Japanese people for him to win.

Hideki is an awesome player. I remember losing a playoff to him at Memorial. I told him early in his career when I played with him, I said, You’ve got to be a major champion some day; you’re that good. I actually played in a pro-am with him in Sony Open when he was an amateur and I was the pro in the group, and it’s nice to see. It means a lot. I know Y.E. Yang won the PGA Championship, the first Asian-born player to win a major, and then first Asian-born to win the Masters, it’s a big deal. It’s not over yet, but I’m thinking that he does. It would be huge for Asia.