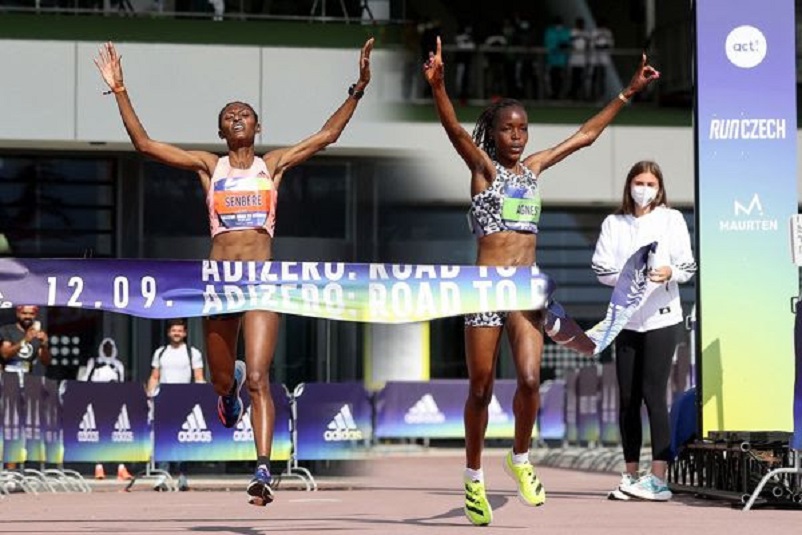 World records of 30:01 by the late Agnes Tirop over 10km and 14:29 by Senbere Teferi over 5km set last year in Herzogenaurach have been ratified.

Tirop, who died in tragic circumstances just one month later, broke away in the final two kilometres of the race and went on to smash the women-only world record, taking 28 seconds off the mark that had been set by Morocco’s Asmae Leghzaoui in New York on 8 June 2002.

Tirop was part of a five-woman lead pack during the early stages and passed through 4km in 12:07. A couple of minutes later, Tirop and fellow Kenyan Sheila Chepkirui had broken away from the rest of their opponents, reaching the half-way point in 15:00 after coving the fifth kilometre in a swift 2:54.

Chepkirui then moved in front of her compatriot and tried to force the pace but was unsuccessful in making a break. The duo continued to run side by side for the best part of three kilometres, but world 10,000m bronze medallist Tirop started her long run for home with about six minutes to go.

Tirop, who won the senior world cross-country title as a teenager back in 2015, passed through 9km in 27:07 with a comfortable lead and was still comfortably inside world record pace. She didn’t ease back for the final kilometre, though, and covered it in another 2:54 to reach the finish line in 30:01.

“I’m so happy to have broken the world record,” said Tirop. “I felt the pace was good and Sheila assisted me a lot. The course was very good too.”

Tirop went on to compete over 10km in Geneva in early October 2021. It was to be her last ever race; she was stabbed to death in her home just 10 days later.

Following Tirop’s tragic death, the World Athletics Cross Country Tour event in Eldoret was named in her memory. A foundation against domestic violence has also been established in her honour.

Just moments after the 10km race in Herzogenaurach, 2015 world 5000m silver medallist Teferi ran away from her opponents after the first kilometre with an incredible solo effort, winning the 5km by 25 seconds in 14:29.

The Ethiopian ran with the pack for the first kilometre, covered just inside three minutes. Then, sensing that the pace wasn’t quite fast enough to challenge the world record, set off on her own and covered the second kilometre in 2:49.

“I’m so happy,” said Teferi. “After the Olympics, I knew I was ready to go after this world record.”