Home International Red Bull Racing meets Air Race – in the sky over the... 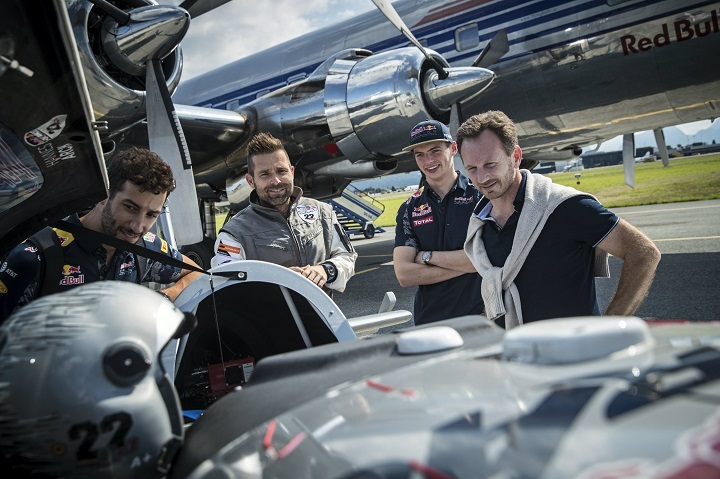 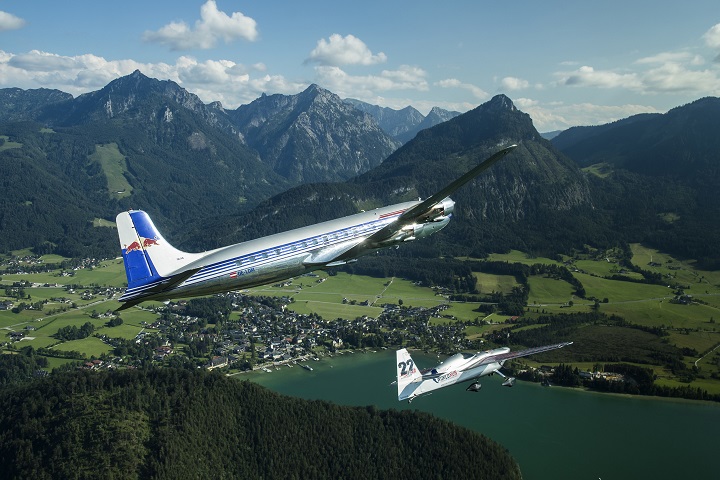 Red Bull Racing Team Principal Christian Horner and drivers Daniel Ricciardo and Max Verstappen got a special ride in a vintage DC-6 aircraft on their way to this weekend’s Austrian Grand Prix in Spielberg, as well as a stunning aerobatic escort by Red Bull Air Race pilot Hannes Arch from Austria.

SPIELBERG (AUSTRIA) – A home race does have its advantages. With just days to go before Formula 1 kicks off in Spielberg, Austria on 1–3 July, Red Bull Racing Team Principal Christian Horner and drivers Daniel Ricciardo (AUS) and Max Verstappen (NED) were delivered to the team’s home event in a vintage Douglas DC-6B aircraft. Along the way, Austrian motorsport hero and Red Bull Air Race pilot Hannes Arch met them in the sky.

First stop for the Red Bull Racing trio: the architecturally striking Hangar-7 venue in Salzburg, where they joined the 2008 World Champion Arch to take in an exhibition on the high art of Formula 1 as well as the meticulously curated collection of rare historic aircraft on display. Then they hopped on the DC-6 – a plush custom part of that collection that belonged to a European head of state in the mid-twentieth century – for breathtaking views of the Alps en route to the Zeltweg Airport near Spielberg.

The F1 team and a few lucky journalists accompanying them got a private show when Arch, who had taken off in his raceplane to escort them, found a patch of air to execute expert maneuvers from barrel rolls to inverted flying. Arch knows the skies above Spielberg well; not only is he a native of the Styria region, but in April he finished second at the third consecutive Red Bull Air Race held in the dramatic mountain setting of the Red Bull Ring.

The Austrian Grand Prix kicks off with Practice sessions on Friday, 1 July, climaxing with the race on Sunday, 3 July. For Arch, the next challenge will be the fourth stop of the Red Bull Air Race World Championship, when the ultimate motorsport series in the sky returns to the heart of Budapest, Hungary for the ninth time on 16-17 July.