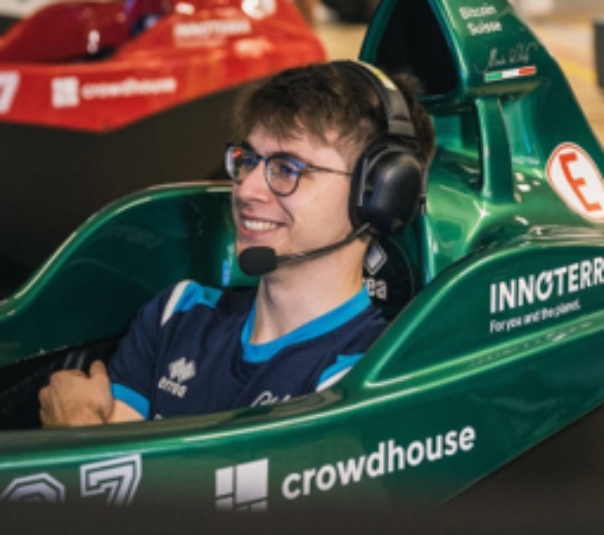 The favourites lived up to their role. With Javier Loro in the Challenger League and
Alejandro Sanchez in the Racer League, both winners come from Spain.

For Sanchez, the title was just a formality before the final. He arrived at the airport with a 23-point lead over the Czech Michal Smidl.

He started the race from fourth on the grid, caught Christoph Holstein in turn one and stayed in third place for long stretches.

While Sanchez gained one place, rival Smidl could not get past eventual race winner Coque Lopez.

In lap ten, there was even a collision between the two, with a bad outcome for Smidl, who ended up third behind Lopez and Sanchez.

Not enough to take the title from Sanchez. The latter wins 5000 Swiss francs with the title.
“I will buy new car tyres with the winnings”. Alejandro Sanchez – Overall winner of the Competition 2021

While Sanchez arrived at the last challenge with a comfortable lead, the fight for third place was completely open.

Polesny, Dedic, Holstein and Lopez were separated by just 11 points. In the end, it was Lopez who secured 3rd place in the championship by winning the race in extremis.

The Spaniard received a 5 second penalty and was mathematically behind Sanchez and Smidl until the last lap.

But due to their duel, he managed to stay ahead of them at the end of the race with his
penalty and thus pass Polesny in the overall standings.

Spanish Joy in the Challenger League

For the Challenger League leader, the race started with a shock.

Javier Loro was hit by Jasin Ferati in turn one, so that the Spaniard slid into the gravel. David Cid, who still had a minimal chance of winning the title, was able to slip into first
place.

But: Due to a pile-up in the midfield, Loro only dropped back to second despite the crash.
“Since the start-finish is a long curve, the start should be complicated,” Loro guessed before the race.

“He hit me in the rear and I thought to myself, ‘My God! What’s he doing?’ But these things can happen in a race,” he said afterwards.

After the turbulent start, Loro, who took pole by one second in qualifying, concentrated on catching up.

After only three laps, the Spaniard was able to catch up with his rival Cid, but lost the gap again due to a spin. In the end, Cid was able to defend first place. Loro, however, took the championship title. Michael Frei completed the podium.

Debut on the Zurich Airport Circuit

The debut at the virtual Zurich airport was a complete success. Exciting starts, numerous duels and overtaking manoeuvres make you want more.

“The course is quite demanding, I really like that,” Loro sums up. Championship runner-up and first race winner in history Cid also praises the airport track: “I think it’s great.”

These will then possibly be on the 2022 Competition race calendar.