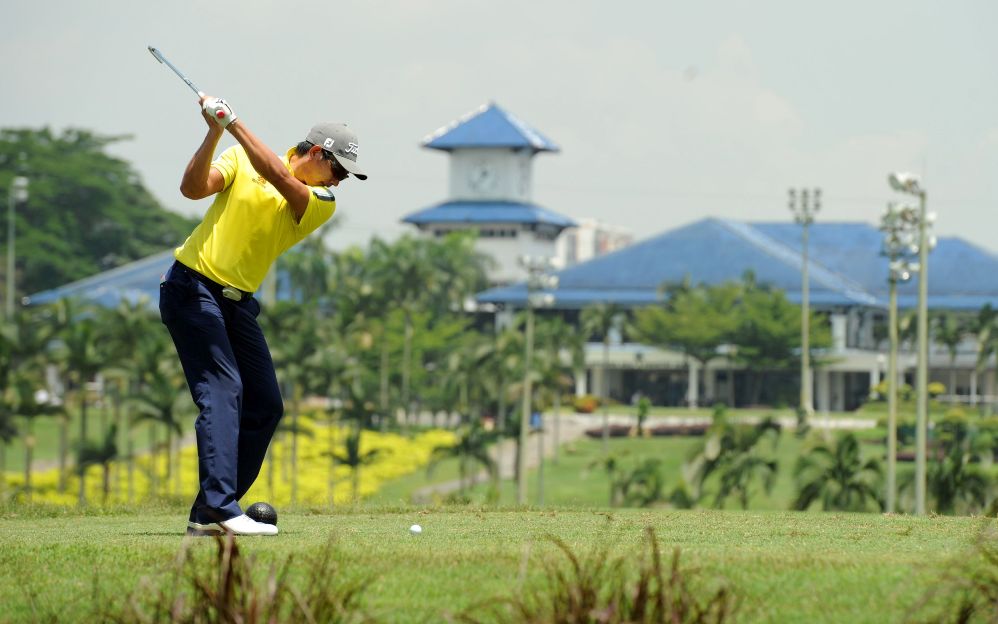 Thailand’s Sattaya Supupramai battled through fatigue and the weather elements before taking a two-shot lead over Malaysia’s Danny Chia at the third round of the weather-disrupted PGM Northport Glenmarie Championship on Friday.

The Thai was 11-under par through 13 holes before lighting threats forced play to be suspended again at the RM200,000 (approximately US$60,000) Asian Development Tour (ADT) event.

Sattaya had to returned in the morning to complete his remaining 12 holes from his second round where he signed for a three-under-par 69 to take a share of halfway lead with Wolmer Murillo of Venezuela, Malaysia duo Nicholas Fung and Kenneth De Silva.

The Thai immediately stepped back to the tee where he extended his lead atop the leaderboard.

Title holder Chia stayed two shots back of Sattaya with four holes left to play while compatriot Fung and Australian Darren Tan were tied on matching 198s through 13 and 14 holes respectively at the Glenmarie Golf and Country Club, Garden course.

Sattaya kept up his scoring tempo despite having to battle through fatigue to stay ahead of the chasing pack.

“I played 25 holes today and I am very tired right now. I tried to keep to my tempo and stay in play. My putting was great today. I hope to play better tomorrow,” said the Thai, who claimed his maiden ADT win in the Philippines last year.

“I’ve been talking to my new swing coach, Boy, every day after my rounds. He gave me a lot of advices and I felt good every time after I spoke to him. My game is in good shape right now. I don’t want to think about winning yet. I just want to play my game,” added Sattaya.

Meanwhile Chia hopes to remain consistent after charging into contention with a second round 67 on Friday.

“I’m playing solid. My iron-play was really good today although I wasn’t putting as well. I’m feeling better after going through rehabilitation from the shoulder surgery I did earlier. This is not a golf course that really suits my game but I will do my best and we will see how it goes,” said Chia, who was the first Malaysian to win on the Asian Tour in 2002.

Only 16 players who made the cut managed to complete their rounds as the third round of the PGM Northport Glenmarie Championship only started at 12.00pm local time due to the resumption of round two on Friday morning.

Play was halted again at 4.36pm because of lightning threats. This is the fourth suspension of the week.

A total of 35 players will return on Saturday at 7.30am to complete their third rounds while the final round will commence at 8.00am in the same order of play as round three.