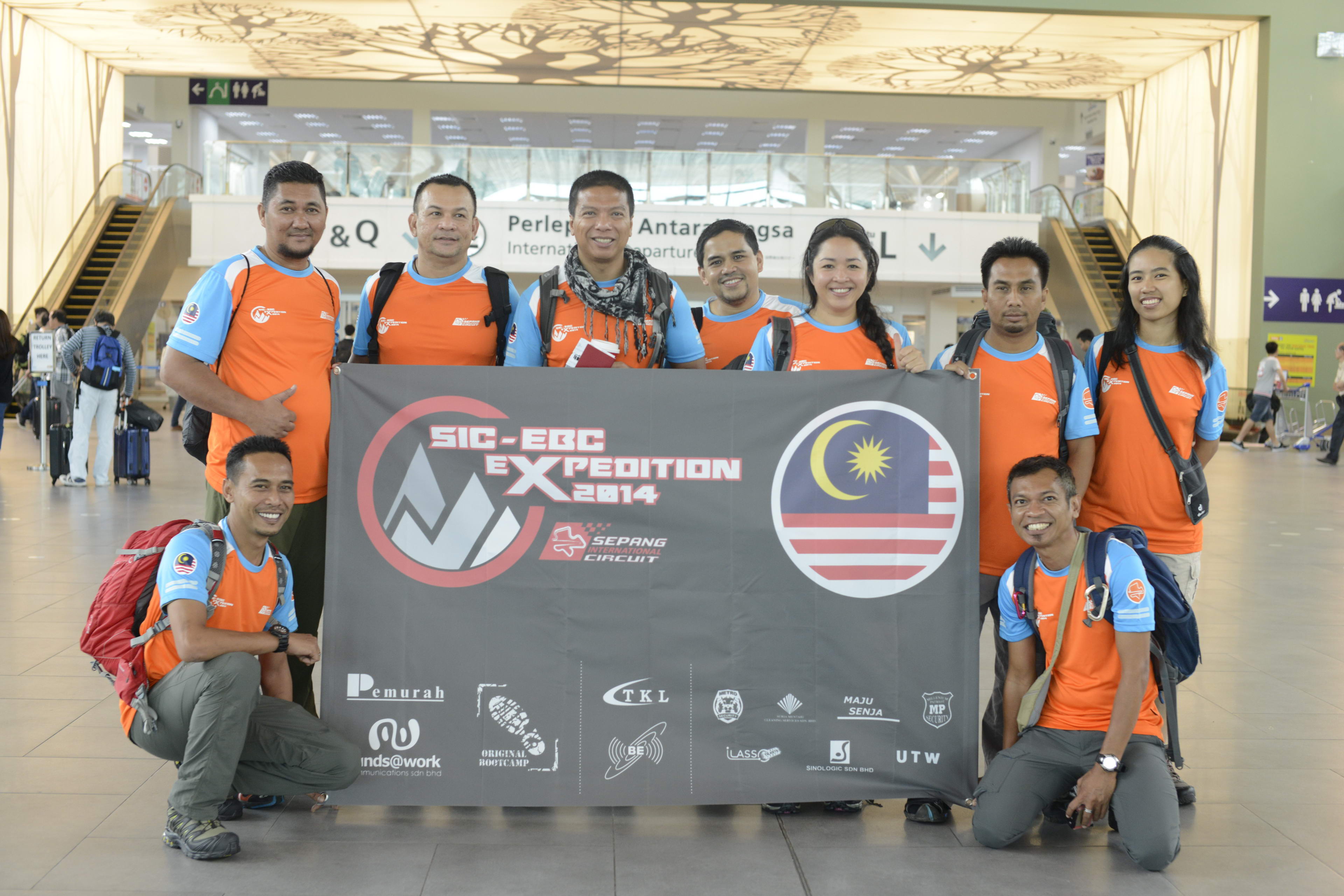 SEPANG – After 11 active months and a host of international and domestic events, staff members of Sepang International Circuit (SIC) took a break from their daily routine to head to Nepal for a special expedition to the Everest Base Camp (EBC).

Led by its Chief Executive Officer Dato’ Razlan Razali, the nine-person team that included its Chief Finance Officer Eddy Rashdan Mohamed and two female members left for Kathmandu today, armed with the necessary hiking skills and stamina plus loads of spirit and excitement.

“I must confess that I am a little worried, but excited as well. I have prepared myself with plenty of googling and reading to have some idea of what to expect. But, deep inside, I know that it will be very, very different. So, I told myself, however challenging it may be, I am ready for it and I am going to enjoy it. I guess it is the same with the other team members. We need a break from work and our daily routine – this expedition will be a truly different experience,” said Eddy.

The two women in the team – Yasmeen Syahiera and Marzlyny Razali echoed Eddy’s sentiments – sharing that the team was looking forward to the trip and had put plenty of hours into preparing for the adventure.

“For the last few weeks, we have been talking about nothing else but this expedition. I was even guilty of discussing this trip with some of them on MotoGP Race Day. That was the busiest event that I have ever worked on, with massive crowds and a very hectic work schedule, but the expedition was too important to me, and I could not keep from talking about it,” said Yasmeen, who is currently attached to the CEO’s Office.

The expedition comes just weeks after the staging of Malaysia’s most highly attended Malaysian Motorcycle Grand Prix, and two days after the conclusion of the 13th edition of the Malaysian Super Series, which ran for six rounds this season.

Commenting on the expedition, Dato’ Razlan said the special SIC-EBC trip was aimed at fostering closer relationships and building better understanding amongst the staff members.

“This is a special expedition to encourage new and different adventures and build closer teamwork. SIC also decided on this expedition for the staff to put their workload down and take a break after a hectic and high-pressured year-long programme.

“This expedition will take SIC’s team to the next level. It will be good for the team and SIC as a whole,” said Dato’ Razlan, who was bitten by the trekking bug a few years ago and had previously taken two trips to the Everest Base Camp (EBC).

Confident that the expedition would further enhance the leadership qualities and build personal character for his team members, he proposed the special expedition to the SIC management.

“Trekking to Everest Base Camp was one of the best experiences in my life. Besides the breathtaking views, the challenge not only made me a stronger person but also gave me a new perspective on life. It’s very difficult to explain with words. Hence, I proposed to my team members to join me there to feel the experience for themselves,” said the 42-year old.

A keen athlete and serious biker, Dato’ Razlan, who took over the helm of SIC in October 2008, has not only been aggressively working on transforming the motorsports facility into more than just a racing circuit.

One of the key areas of emphasis he has also focused on is fitness, as he personally led the staff on evening jogs around the circuit, cycling around its vicinity and breaking sweat at the circuit’s gymnasium that includes a boxing ring.

“Trekking and mountain climbing are the new areas of interest that I am getting the staff involved in. It’s not only good for improving their fitness and strength, but also enhances one’s survival skills.

“To trek through the rugged terrain, you must have a certain level of physical endurance. A trek can be the ultimate test of your physical abilities and because of this, it is a wonderful motivator to enhance physical fitness,” said Dato’ Razlan, adding that the company had previously organised trips to Mount Kinabalu, Mount Rinjani in Indonesia and various other outdoor trips for the staff.

For the SIC-Everest Base Camp expedition (SIC-EBC), the members of the nine-member team that Dato’ Razlan is leading were selected based on strict selection criteria, including climbing Mount Kinabalu and Mount Rinjani in Indonesia, Boot Camp and Strength Endurance sessions and completion of the recent Viper Challenge organised by the circuit.

“I am happy to say that members of this SIC-EBC expedition team are not just physically fit, but more importantly, are mentally strong and have high spirits. They are ready for the challenge and ready to make SIC and Malaysia proud,” he said, adding that though the trekking expedition sets EBC as the final destination, it remains a very challenging one in view of the extreme weather conditions and the difficult terrain.

From Kathmandu, the team would fly to Lukla on the morning of Thursday, 20 November to start their expedition with a three-hour trek to Phakding.