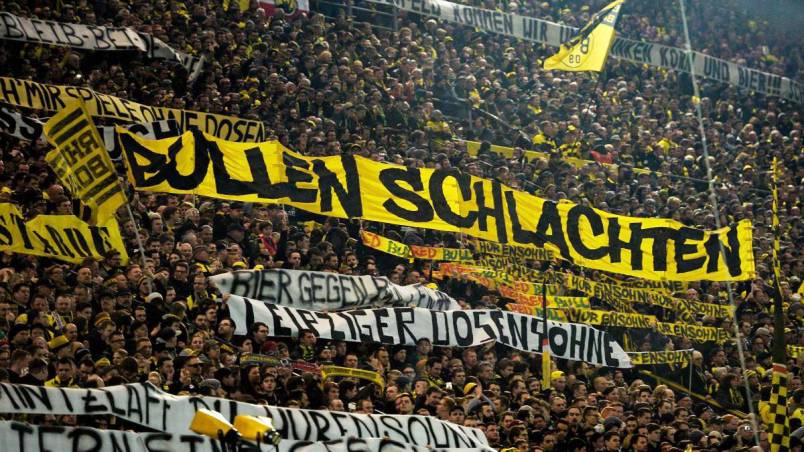 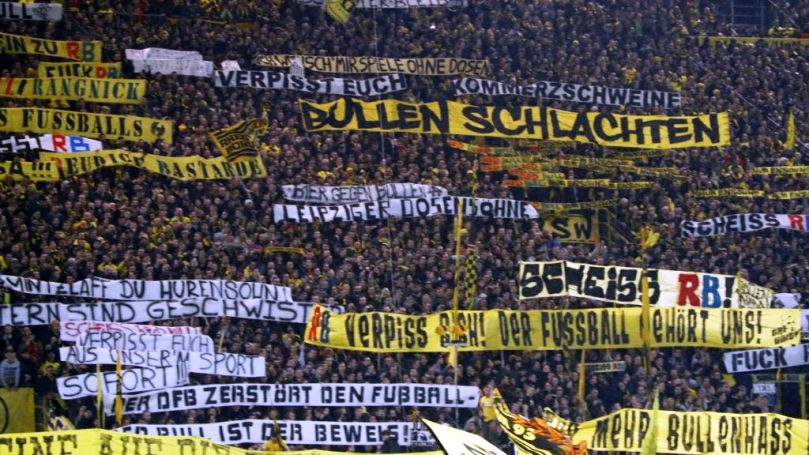 An RB Leipzig fan has described how hooligans in Dortmund attacked their group, which included children, with stones and bottles and levels of hatred towards the Red Bull-backed club which have shocked German football.

Hooliganism is nothing new in German football, but Saturday’s violence meted out to RB Leipzig supporters, including young families, was a brutal fresh low.

Some of the terrified 8,000 RB Leipzig supporters, who saw their team lose 1-0 in front of 81,360 at Dortmund’s intimidating Signal Iduna Park stadium, were attacked en route to the game.

“They threw eggs, cans, bottles and stones at us, flags and scarves were torn away.

“Our children were pushed and attacked, we had to get them to the sides. There were several people injured, some with lacerations.

“In eight years of being a fan I’ve never experienced anything as bad as in Dortmund.”

Hatred from rival fans is something RasenBallsport Leipzig, founded by Red Bull in 2009, has had to deal with on the path to Germany’s top tier.

Following four promotions in seven years they are perceived as a threat to all things good about German football because of the obvious commercialism they represent.

RasenBallsport — GrassBallsport — is a fabricated German word to get around the ban on Bundesliga clubs bearing a sponsor’s name.

The Bundesliga’s “50+1” rule stops clubs being run by a single rich investor and its members must have a controlling share, except RB Leipzig has just 17 members — who are all essentially Red Bull employees.

At the start of the season, Borussia’s CEO Hans-Joachim Watzke was one of RB’s most outspoken critics, saying Leipzig “play football to perform for cans of drink”.

The head of a severed bull was thrown into the playing area when Leipzig lost a German Cup match at Dynamo Dresden in August.

And home fans in Cologne staged a sit-down protest which blocked the RB team bus and meant the kick-off for a league game was delayed in September.

But Dortmund was something else.

During the Bundesliga match, Leipzig players had laser lights shone into their faces from the terraces and there were around 60 banners in the stadium with anti-Red Bull slogans.

One of the most offensive read: “Burn-out, Ralle: go hang yourself”, referring to Ralf Rangnick, RB’s director of sport who resigned from Schalke in 2011 with exhaustion.

“What happened there (in Dortmund) and what we have all seen, is a disaster for football.”

Eberl’s Gladbach host RB in 10 days and he says “the framework of good decency must be maintained” so that visiting fans can watch the game without fear.

In a video message, Dortmund boss Watzke said the club will do “everything in our power” to catch the culprits and two fans responsible for the banners have been identified, reported Bild.

Police chiefs have criticised Dortmund for allowing the banners into the stadium.

And Watzke’s sharp “performing cans” comment last year could have fuelled the violence from Dortmund’s “Ultras” (hooligans), according to a fan expert.

“The neuralgic at this point is whether one, as head of a club, the team, the trainer or the CEO, still pours oil on the fire, knowing that their own fan culture can’t deal with it,” Professor Harald Lange told Cologne-based newspaper Koelner Stadtanzeiger.

According to Munich-based newspaper Sueddeutsche Zeitung, Dortmund’s hooligans were prevented by police from attacking the Leipzig team bus and then aimed their frustrated aggression at visiting fans.

Dortmund can expect to be heavily punished by the German Football Association (DFB).

The club’s senior figures are hoping there will be no further violence for Wednesday’s German Cup third-round game at home to Hertha Berlin.

Dortmund are already on probation having been fined 75,000 euros ($80,000) after their fans rioted following May’s German Cup final when Dortmund lost on penalties to Bayern Munich. – Agence France-Presse