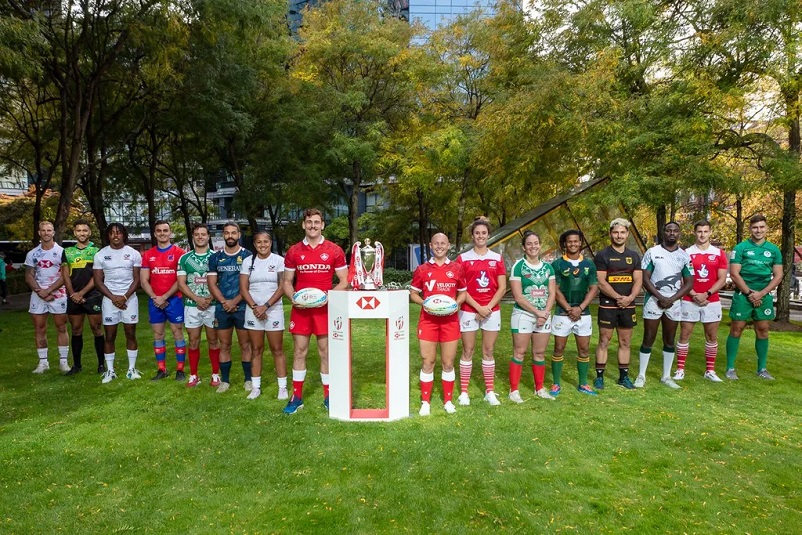 The action gets underway when Canada face the USA at 09:00 local time (GMT-7) on Saturday in the women’s fast four competition

The captains of the 12 men’s and four women’s teams competing at the HSBC Canada Sevens gathered in Vancouver on Thursday as the HSBC World Rugby Sevens Series returns to action this weekend.

The final squads have been confirmed with a mixture of exciting new talent and experienced players on show in Vancouver following the outstanding women’s and men’s competitions at the Olympic Games in Tokyo in July.

The men’s competition will kick off the HSBC World Rugby Sevens Series 2021 with the 12 teams divided into three pools of four teams, in line with the Olympic competition format.

Pool A sees South Africa, who finished as 2020 Series runners-up after reaching the podium in four of the six events, drawn with Series core teams Kenya and Spain and invitational team Mexico.

South Africa’s Dewald Human said: “It’s nice to be back after the Olympics. We have a young side with four debutants so we are looking forward to this weekend and showcasing what we can do. We play Mexico first and are focused on that first game.”

In Pool B, Great Britain, who narrowly missed out on an Olympic medal after finishing fourth in Tokyo, will face Ireland and invitational teams Hong Kong and Jamaica.

Great Britain captain Robbie Fergusson said: “It’s exciting to be back on the Series. We had a big build up to the Olympics and after a little break, we got back into training with a new focus on the Series and a few new faces in the squad. We’re buzzing to have fans back, it’s been a long time since we played in front of them back here in Vancouver where the atmosphere is always fantastic in a great stadium.

“There’s a lot of unknowns coming into this event, with some new teams getting opportunities to play, which is great for the growth of rugby sevens. We look forward to a competitive tournament and the unexpected elements will add to the excitement.”

Pool C includes the USA, Series runners-up in 2019, together with hosts Canada and invitational teams Germany and Chile. The hosts will be looking to repeat their performance from the HSBC Canada Sevens 2020 in Vancouver, where they thrilled the home crowd to claim the bronze medal.

Canada captain Phil Berna said: “Fans are going to see a lot of exciting rugby this weekend. The crowd definitely plays a role, when Canada comes on they get loud and we feed off the energy.

“There’s a lot of new faces in our team with the next generation ready to take over. There was so much training that went into the lead-up to the Olympics, which was a one-off tournament and we feel there is still more in the tank so we are fortunate to have this tournament and in Edmonton next weekend.”

Germany captain Carlos Soteras Merz said: “We’ve been waiting a long time for this opportunity. Playing on the Series means a lot for us. As a core group, we have been together and working towards it for a long time so we are happy to be here and we’re looking forward to playing some high-quality rugby against all our opponents.”

In the women’s fast four competition the teams – Canada, Great Britain, Mexico and the USA – will all play each other before the top two play for gold and the other two teams compete for third place on Sunday.

USA captain Joanne Fa’avesi said: “We had our first training session here on Thursday so it was nice to get out there, get moving and get ready for this weekend. It’s nice to be with a new younger group, with fresh mindsets and it will be exciting to play with them.”

The women’s competition will get the action underway when Canada face the USA at 09:00 local time (GMT-7) on Saturday.

The men’s Series event begins with a Pool B encounter between Ireland and Hong Kong at 09:44 local time on Saturday. The last match of day one promises to be an exciting encounter as hosts Canada take on the USA in Pool C at 18:33 local time.

Day two begins with the first of the men’s quarter-finals kicking off at 09:20 and concludes with the women’s Fast Four final at 16:56 followed by the men’s final at 17:28 (all times local).

The Vancouver tournament will be followed by a second HSBC Canada Sevens event in Edmonton the following weekend, on 25-26 September. The two rounds in Canada form the 2021 Series, with the Series title awarded in Edmonton.

Given the unique circumstances of the pandemic, there will be no relegation from the 2021 Series and the results will not contribute towards seedings for any other future events. – WORLD RUGBY