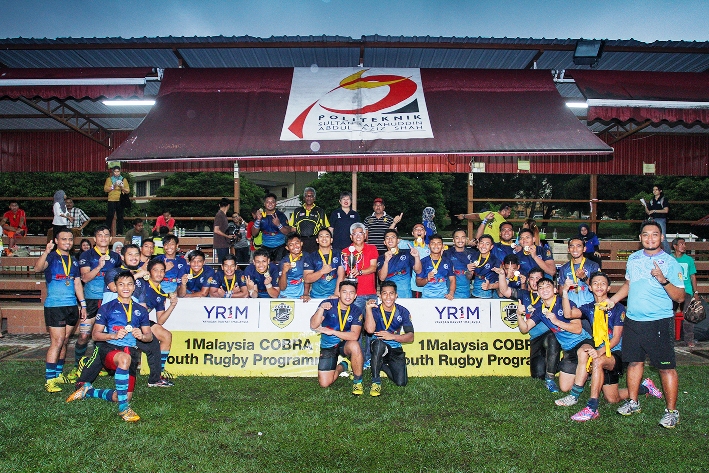 The SSTMI Junior team from Sekolah Sukan Tunku Mahkota Ismail in Johor emerged as the champions of the 1Malaysia COBRA 15s 2016(U19) Tournament with a hard fought 28-20 victory over the Terengganu U19 state team.

The tournament is the highlight of rugby competition at the U19 level and is part of the 1Malaysia COBRA Youth Rugby Programme. The programme is a collaboration between Yayasan Rakyat 1Malaysia and COBRA and has been on-going since the third quarter of 2014.

“This tournament is also used to scout for players who will represent Malaysia’s national teams at U18 and U19 levels. The national teams will compete in the U18 Causeway Challenge in August 2016 as well as the Top Division of the Asia Rugby U19 Championship in December 2016,”said COBRA President Lt. Col (Retd) Tommy Pereira.

“This year’s tournament was held over seven weeks. This enabled the playersto showcase their skills at a competitive level almost every weekend during this period,” Lt. Col Tommy continued.

The tournament was held at the Politeknik Sultan Salahuddin Abdul Aziz Shah in Shah Alam. The first round of matches was held on 19 March 2016 and the tournament culminated with the Cup, Plate, Bowl and Spoon Finals, which were all played on 7 May 2016.

“This year, 10 teams took part in the tournament, compared to six last year.The tournament also brought together over 300players throughout Malaysia, including Sabah and Sarawak, which provides a bigbase for selection to represent Team Malaysia 15s U18 and U19,” she said.

“Team Malaysia 15s U19 is competing inthe Top Division of the Asia Rugby U19 Championship for the first time in Malaysian history, and we hope that Team Malaysia will be represented by the best players at U19 level in the country. We also expect to put up a strong team to face our southern neighbours in the Causeway Challenge,” Ung concluded.

The U18 Causeway Challenge is an annual challenge between Malaysia and Singapore and the Asia Rugby U19 Championship is held every year to determine the rankings of teams in Asia.