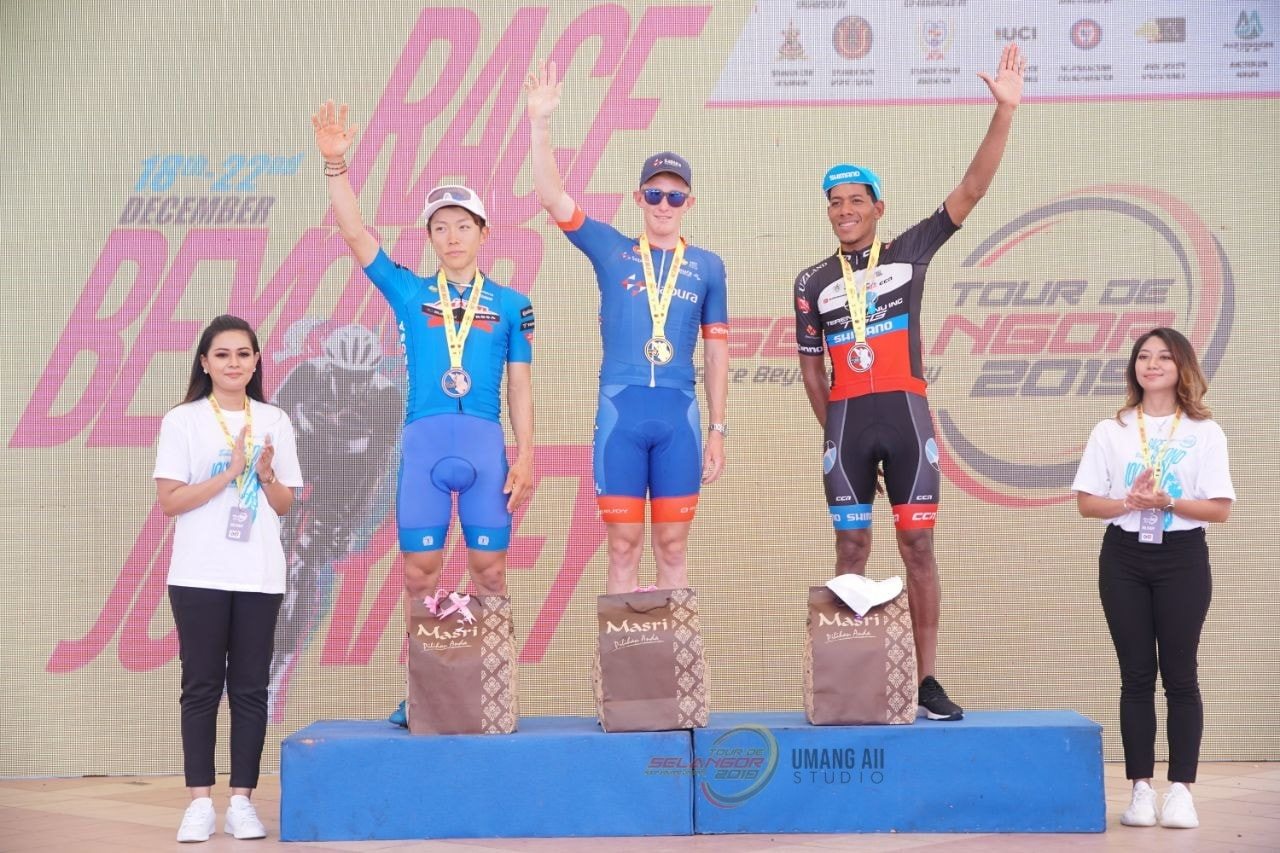 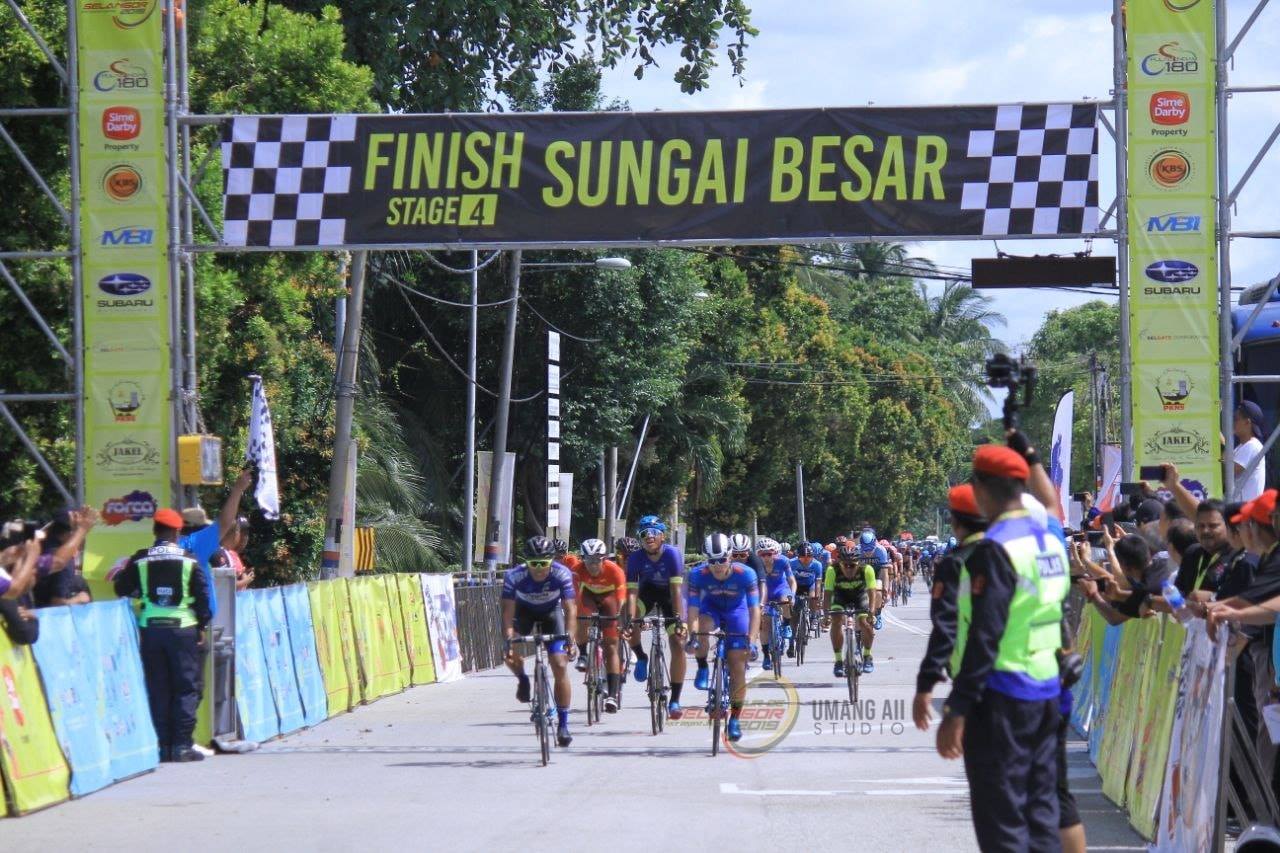 If anyone thought Marcus Culey would ease his foot off the pedal after taking three straight wins through solo breakaways in the first three stages of the Tour de Selangor 2019, they were so very mistaken, as the Australian again rode to a monumental fourth straight win in Stage 4 from Selayang to Sungai Besar today.

Team Sapura Cycling’s Culey, 26, sprung into action early in the stage as multiple attacks went away at the front of the peloton right from the start, most significantly a solo attack from Team Embrace The World’s Benedikt Helbig, who took the first categorised climb after 14.8km in Rawang, with Culey chasing in a group of four riders.

It soon expanded into a leading group of 16 riders which contained the main protagonists including Culey, TSG’s Robin Christoffer Jurado and Aisan’s Shotaro Watanabe.

From the breakaway, Culey took the second categorised climb of the day at KM51.1 in Kerling to confirm his victory in the mountains classification with an unassailable 21 points lead over second placed Ahmad Yoga Ilham Firdaus of the PGN Road Cycling Team, with just one Category 4 climb remaining in the final stage tomorrow.

Culey went on, sweeping the two intermediate sprints and as the breakaway group began dwindling with riders dropping out along the way, from a group of 5 with 20 kilometres to go, he launched a surprise solo attack which was never caught.

Almost nonchalantly waving to crowds as he strode to the finish line with the chasers out of sight, Culey crossed the finish line 23 second ahead of second placed Jurado, while Watanabe outsprinted France’s Loic Desriac of the Bikelife Dong Nai team and Sofian Nabil Omar Bakri of the AmSkins Racing Club to third spot.

“It was another good day for the team. The harder the stage, the better it is for me. It was not going to be a bunch sprint, so I could keep riding hard all day. It broke down the breakaway group a bit with some dropping out of it. It made it hard for everyone there. So, I took the win from there,” said Culey.

“I trained really hard in Australia the past two or three months. I didn’t really have an off-season after the Tour of Indonesia, maybe four or five weeks off the bike and every year that you take a long break, you come back stronger. So, I’ve had two or three months to work on it, so its all due to good preparation.

“I didn’t really think I was going to win again today, it just happened and I took the opportunity. For tomorrow, I’m not sure about the win. You would think it is going to be a bunch sprint as there is a circuit, but if it gets windy and the bunch gets splitted up, you never know.”

Culey retained the yellow, green jersey for the points classification and confirmed the mountains classification win, while teammate Mohd Nur Aiman Zariff retained the white jersey as the leader in the young riders classification, looking good for a clean sweep of all leaders jerseys even if Culey doesn’t maintain his appetite to take yet another stage win in the final stage tomorrow.

“Everything went according to plan and I just stuck with the leaders and pushed myself. In the end the gap to the second placed rider in the young riders classification was even extended, so I am happy,” said Nur Aiman, who also bagged the white jersey in the 2017 edition.

The final stage of the Tour de Selangor 2019 tomorrow has been shortened to 87.7 kilometres from an initial 108.2km, from Klang to Shah Alam.

The final stage will feature end with a Category 4 climb at Puncak Perdana at KM28.3, an intermediate sprint at Dataran Kemerdekaan Shah Alam, which will also mark the entry to a circuit where the peloton will complete 5 laps, including a further intermediate sprint on the third passage, before the finish.