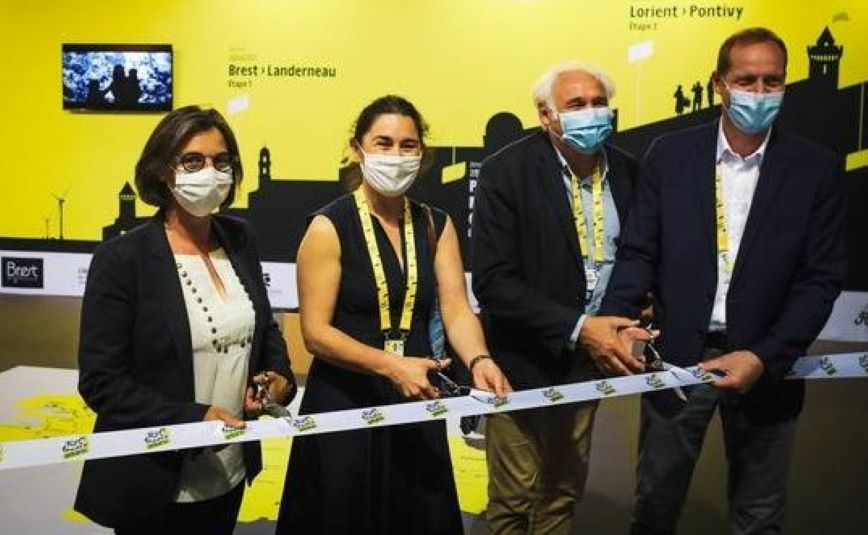 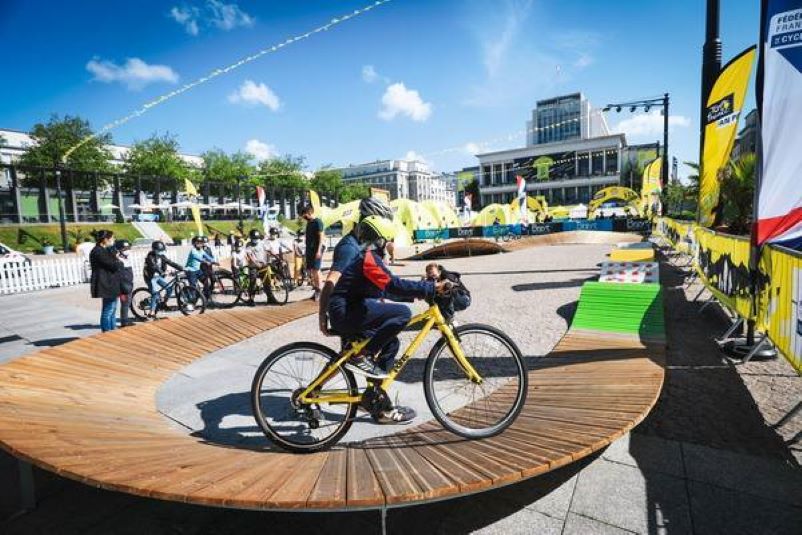 The first four stages in Brittany revive the passion in the hotbed of French cycling despite a strict protocol that remains in place to fight Covid-19.

Chris Froome spoke about his come-back to Brest thirteen years after his Tour de France debut. Valverde, Cavendish, Nibali and Gilbert are the other veterans from Brest 2008.

Julian Alaphilippe and Mark Cavendish also have big memories in Brittany and expressed high ambitions for the first week.

The headquarters of the 108th Tour de France are up and running at the Parc Expo Penfeld in Brest, nearing the boulevard where Eddy Merckx won the prologue of his fifth winning Tour de France back in 1974. It’s been inaugurated by event director Christian Prudhomme along with politicians from Brest and Brittany, the hosting region of the Grand Départ. Starting the pre-race interviews, children from open centres project and young reporters of Radio Ponta were able to question Breton riders in a video-conference due to Covid-19 restrictions. Warren Barguil explained that he regularly rides his bike with female cyclists like Typhaine Laurance while Franck Bonnamour revealed that he only took up cycling at the age of 15. Valentin Madouas described how he combined studying engineering and cycling at the same time but former French champion Aude Biannic, a native from Landerneau where La Course by Tour de France avec FDJ will finish on Saturday, remained tight-lipped when asked how many wins she had in total. More press conferences will take place on Thursday and Friday before stage 1 from Brest to Landerneau on Saturday.

Back to the roots

Brest, the westernmost city in continental France, where the 108th Tour de France will kick off on Saturday, has already hosted the race on thirty occasions. Every Tour de France from 1906 to 1931 stopped in Brest, often coming from Cherbourg (405km) before heading to La Rochelle (470km). Brian Robinson, now 90, took the first ever stage win by a British rider in Brest, on 2 July 1958, after Italy’s Arrigo Padovan was relegated for tugging Robinson’s shirt.

Chris Froome: “Back to Brest means I come full circle”

Chris Froome took part in his first Tour de France in 2008 as a neo pro with Barloworld but he was no stranger to Brittany as he already won the Mi-Août bretonne overall the year before as a member of the UCI World Cycling Centre. “I’m very excited ahead of the upcoming start in Brest where I discovered the Tour de France”, the four-time winner said in a pre-race press conference. “I come full circle now. Actually I come back to Brest again with a very similar mind-set as back in 2008, getting through the Tour de France to get back to my form of racing. My recovery process is behind me now. I’ve certainly been missing the Tour de France for two years. The first year, I watched it from a wheel chair. Knowing the characters and the politics in the race, I enjoyed being a fan again. I didn’t necessarily doubt I’d come back. From the moment the doctors said I’d fully recovered, there was nothing to stop me from coming back and I did everything that was on my power to be here again. I wouldn’t use relief as the right word, it’s a stepping stone. I’m here for lifting my level up. I’m excited. We’ve got a fantastic group of guys, a team with different ambitions, not just one goal. I can use my experience to help Michael Woods placing high on GC and target stage wins. I’ll personally try to do the best job possible to support the guys after I spent the last decade with a team doing that for me. I’m obviously in a very different situation. I haven’t got back to my previous level yet but I’m confident I will.”

The Tour de France kicks off from Brest for the fourth time after 1952, 1974 and 2008. Every time, the defending champion was absent, successively Hugo Koblet, Luis Ocaña and Alberto Contador. Between 1974 and 2008, the Tour never visited Brest. Stage 6 to Mûr-de-Bretagne won by Dan Martin started from Brest in 2018. Thirteen years after the last Grand Départ, five riders of 2008 are still in contention and they’re probably the five biggest names among currently active cyclists: Alejandro Valverde and Philippe Gilbert who had come first and second in stage 1 to Plumelec, Mark Cavendish who was just five days away from the first of his thirty stage victories, the first one having taken place in Châteauroux where the Tour also returns this year, Vincenzo Nibali who was going to wear the white jersey from stage 12 to stage 15 and another neophyte named Chris Froome.

Julian Alaphilippe: “Mûr-de-Bretagne is special to me”

Being a French world champion at the start of the Tour de France, Julian Alaphilippe is under the spotlights. A few days after he became a dad for the first time, he took a low profile on the occasion of a pre-race press conference. “I’m not sure if this Tour suits me perfectly”, said the Deceuninck-Quick Step rider. “But the course makes it an open race. I’ll set my ambitions after the first week. The first two stages suit me. I can also do well in the first time trial on stage 5, based on my performances in the two time trials of the Tour de Suisse.” Although he’s one of the favourites for stage 1, the Frenchman knows the finale of stage 2 even better since he finished fifth of stage 4 in the 2012 Tour de Bretagne at Mûr-de-Bretagne. “I remember it very well”, Alaphilippe said. “It was one of my first category 2 races and that’s where my skills as a punchy rider were revealed.” In 2013, Alaphilippe won stage 4 of the Tour de Bretagne to Fougères but it’ll be a different finale there for stage 4 of this year’s Tour de France. It’ll suit the pure sprinters. The last Tour de France finish in Fougères was won by Mark Cavendish who took over from Alaphilippe to talk about the first week of racing. “It’s a dream to be here”, the Briton said. “I was prepared for anything and I happen to have already won in Fougères and Châteauroux in the past.” Team manager Patrick Lefévère had the last word to comment on Cavendish’s last minute inclusion into the team: “We called him in emergency but he’s like a substitute who enters the pitch at the 89th minute and scores the winning goal.” – www.letour.fr