In news that will bring relief to anyone worried over Tokyo’s preparations for the 2020 Olympics, Japan’s top toilet maker on Wednesday became the latest sponsor of the event.

TOTO — best known for its high-tech loos equipped with frighteningly accurate bidet jets — will supply bathroom and kitchen fixtures for the pan-global Games and the subsequent Paralympic event.

Financial terms of the contract were not released, but the company said it would supply “high performance” toilets that are “comfortable, stress free, and easy to use”.

Nearly every household in Japan and many public washrooms are equipped with a seat that is plugged into the mains electricity.

At their most basic, they simply get warm and spray warm water for rinsing, while at the other end they boast motion sensors, high-power odour-neutralisers and variable water jets, all tailored to conserve energy and water.

The nation’s bidet seats have won the hearts of the rich and famous, including Madonna and Will Smith, who have both sung their praises.

Among the Games other sponsors are Japan Airlines, Canon, Toyota and McDonald’s. – Agence France-Presse 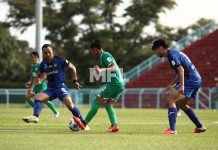