Home Football Warriors through, thanks to ‘Ghad’ 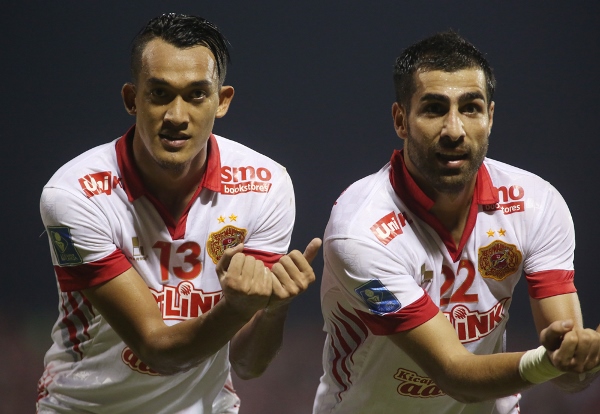 DEFENDING champions Kelantan, big spenders Darul Takzim, Pahang and Felda United all advanced to the FA Cup semifinals tonight after getting the required results in their second leg quarterfinal matches.

Kelantan were held to a 3-3 draw at the Selayang Stadium by a gritty PKNS FC, but the result was enough to book their last four spot 6-5 on aggregate, after winning the first leg in Kota Baru 3-2.

At the Darul Aman Stadium in Alor Star, moneybags Darul Takzim walked away with a 2-0 win over Kedah to advance 5-1 on aggregate with goals by national strikers Norsharul Idlan Talaha and Safee Sali.

Malaysia Cup champions Pahang edged Premier League’s Police 2-1 at the Darul Makmur Stadium in Kuantan and will play the Southern Tigers next in a repeat of last year’s semis.

In Kuching, Sarawak fell on away goals after Felda held the Crocs to a 2-2 draw. The first leg ended in a scoreless draw.

The Red Warriors (TRW), however, were taken the full distance by PKNS in a thriller at Selayang, in a match which could have gone into extra-time but for striker Mohamed Ghaddar’s late intervention. The Lebanese settled the issue with his team’s third goal after PKNS had taken a 3-2 lead with 19 minutes remaining, through a header by Indonesian defender Hamka Zakaria.

PKNS got off to a roaring start, grabbing the lead as early as the second minute through Patrick Wleh, which neutralised Kelantan’s one-goal cushion from the first leg.

But Steve Darby’s men were not rattled by the goal and a freekick from skipper Mohd Badhri Radzi found Ahmad Fakri Saarani, whose glancing header hit the back of the PKNS net, past a stunned Remezey Che Ros.

Kelantan went ahead in the 26th minute through a volley from Shakir Ali, again after Badhri set him up, but it was 2-2 at halftime when Wleh was brought down inside the box by Obinna Nwaneri and Karlo Primorac made no mistake from the spot.

Hamka then made it count with a header in the 71st minute but Ghaddar popped up to make sure the match was decided in normal time.

Kelantan will now play Felda to decide who marches in to the final.