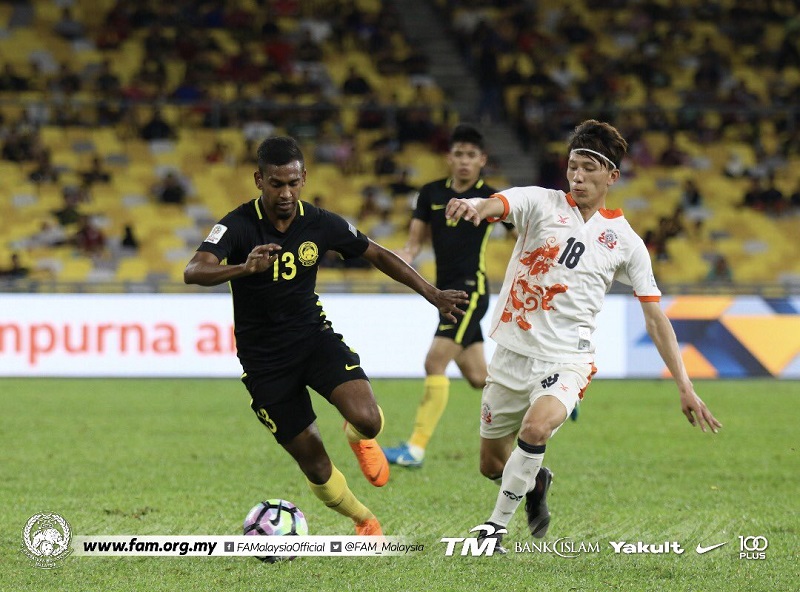 Skipper Zaquan Adha Abdul Radzak was on fire at the National Stadium in Bukit Jalil on Sunday night as Malaysia powered to a massive 7-0 win over Bhutan in an international “A match to end their dry run in style and give Malaysian football new hope.

The win was celebrated by the die hard Harimau Malaya fans as Malaysia had been winless since their 3-2 win over Cambodia in a AFF Suzuki Cup match in November 2016.
Malaysia ranked 178 in the latest FIFA ranking list – their lowest in the history of Malaysian football – were 5-0 up at half-time.
Zaquan helped himself to a hattrick in the first-half – scoring his first and Malaysia’s second in the 20th minute via a penalty and added two more in the 36th and 39th minutes after Wan Zack Haikal had opened the floodgates on 11 minutes with a header off a corner kick by Zaquan.
The Negri Sembilan-born Zaquan, is the twin brother of Aidil, who is also an international, got his fourth goal in the 55th minute before national football head coach Tan Cheng Hoe replaced him on the hour mark. Zaquan handed the skipper’s armband to veteran goalkeeper Khairul Fahmi Che Mat after his exit.
Irfan Zakaria and Syafiq Ahmad were the other scorers in Malaysia’s rousing win after their 2-1 defeat to Lebanon in a Group B Asia Cup qualifying round match in Beirut on Tuesday. – BY RIZAL ABDULLAH