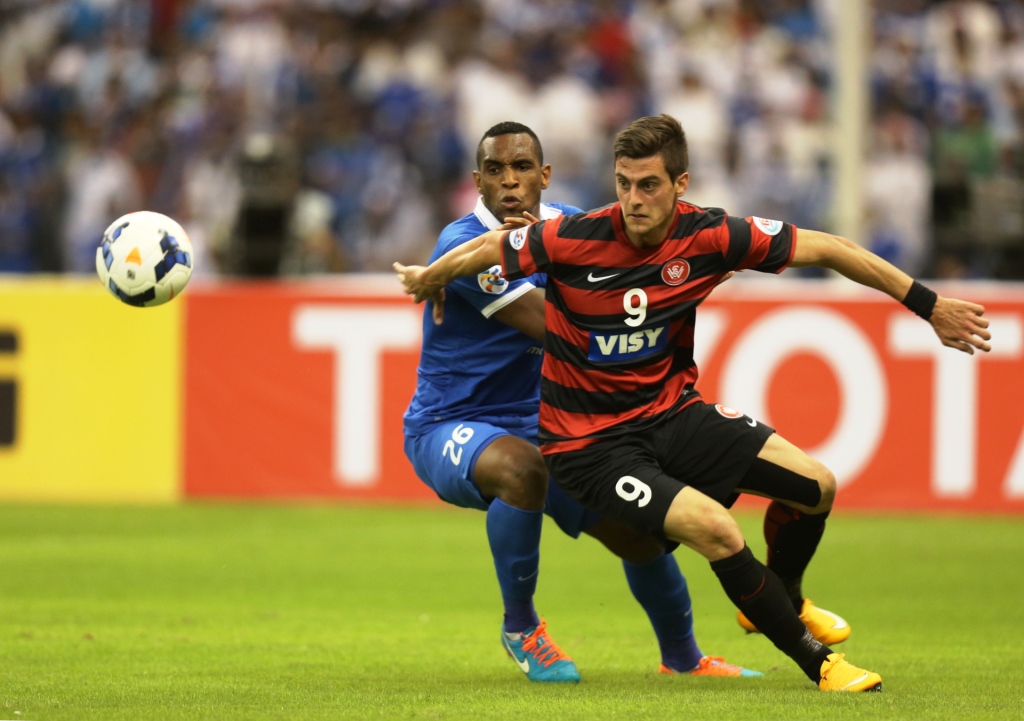 Juric again came on as a second half substitute in Saturday’s final second leg against Saudi Arabia’s Al Hilal in Riyadh having missed the start of the new A-League season as well as Australia’s recent friendlies with the United Arab Emirates and Qatar due to a groin injury.

And despite being unable to repeat his feat from the previous week’s first leg as the substitute slid home the goal which would ensure Western Sydney became the first Australian side to land the continental crown just after the hour mark at Parramatta Stadium, Juric is well on the road to completing his full return to action for both club and hopefully country.

“It is a great way to get back on the pitch. You couldn’t ask for a better way to come back from an injury, to score a goal to win the title. I can definitely build on this,” said 23-year-old former Adelaide United striker Juric, who joined Western Sydney in May last year.

“I was disappointed to miss out on the Australia squad because you are always proud and privileged to represent your country and I couldn’t do that due to injury. But that is behind me now and I am looking forward to getting back on the pitch in the A-League and performing week in and week out and working hard with the boys. Rewards come at the end, but I think it is important for me to step up my game and deliver week in week out now.

“The Asian Cup is a realistic goal for myself. I was fortunate enough to go into the camps for the Belgium and Saudi Arabia games, and I know if I am consistent and I am playing week in week out and playing good football and we are getting results, that’s when the rewards will come.”

Having played his junior football for a number of clubs in both Sydney and Western Sydney, Juric moved to Croatia at the age of 16 to play for Croatia Sesvete before moving on to Lokomotiv Zagreb and NK Inter Zapresic.

He eventually returned to Australia with Adelaide in 2013, and after completing his switch to Western Sydney, Juric made his Australia debut against Korea Republic at the EAFF East Asian Cup before opening his international account a few days later in the same competition against Japan.

Juric was ruled out of Australia’s meetings with the United Arab Emirates and Qatar having suffered a groin injury prior to Western Sydney’s AFC Champions League semi-final second leg success over Korea Republic’s FC Seoul at the start of October.

But with Australia coach Ange Postecoglou continuing to expand his pool of players ahead of the AFC Asian Cup Australia 2015, Juric’s goalscoring return to action for Western Sydney in the AFC Champions League has arrived just in time ahead of the Socceroos’ high-profile friendly with Asian champions Japan later this month.

“I have got the goal on my computer at home and even now I watch it on my phone again to relive that moment. I watched it a few times last night and I am really proud of myself,” added Juric.

“I had a tough few years prior to coming back to Australia and to know what I have been through in those past years, and to come now and lift this trophy, for me personally to score the goal means the world to me. I will definitely remember this one.”

But first, after Western Sydney depart Riyadh on Sunday, Tony Popovic’s side return to A-League action with back-to-back away games starting with a trip to New Zealand to face Wellington Phoenix on Friday.

And with the Japan friendly scheduled to be Australia’s last outing before their AFC Asian Cup Australia 2015 opener against Kuwait in Melbourne on January 9, Juric will look to continue his recent goalscoring form after netting three goals in his last six appearances in the AFC Champions League.

“We have got two tough games coming up and we have got a lot of traveling to do again which doesn’t help us,” said Juric.

“But we will get over that hurdle and shift our minds across to the A-League as those results are important now and that’s what is going to keep us up there amongst the best.”

Western Sydney’s AFC Champions League success completed a remarkable fairy tale run for a club only founded in April 2012, with their current A-League season representing only their third-ever domestic campaign.

Popovic’s side did land the A-League Premiership in their debut season before reaching back-to-back Grand Finals, which included a 2-1 extra-time defeat by Brisbane Roar in May.

“I don’t know how to put into words how I am feeling. Unbelievable is the best way to put it. I am speechless is the only way I can describe my feelings,” added Juric, who was Western Sydney’s highest scorer during the 2013/14 season with nine goals in all competitions.

“For me personally and for us as a team, we set a goal for ourselves at the start of the season and that was to take it a game at a time, but we knew where we wanted to be at the end and that was holding this trophy up, and we believed we could do it.

“Even at times when people doubted us and said that we couldn’t do it as we were up against a big challenge, we were able to defy the odds under those circumstances because we believed in ourselves and we went out to bring the trophy home.”