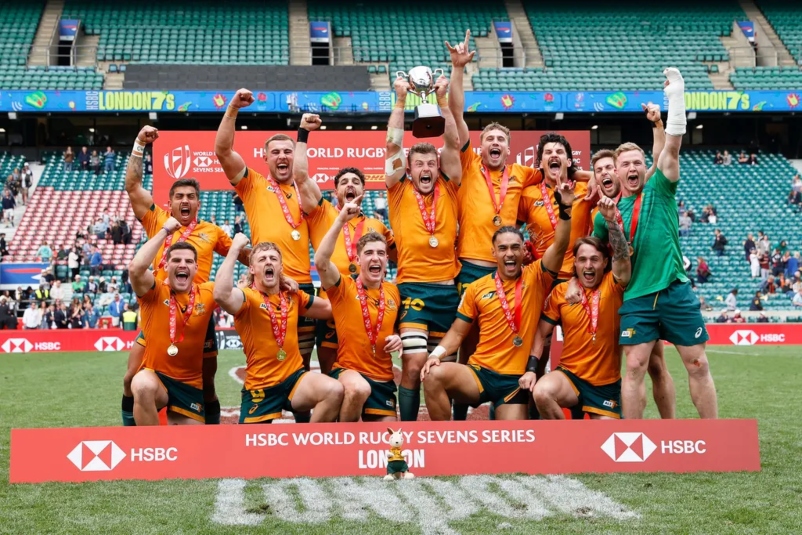 South Africa finish fifth but maintain pole position in race for the 2022 HSBC World Rugby Sevens Series title, which goes down to the final round in Los Angeles on 27-28 August

The battle for the HSBC World Rugby Sevens Series 2022 title will go down to the final event after Australia defeated New Zealand with a thrilling golden-point extra time victory to claim their first gold medal since 2018 in London.

History was made as HSBC Player of the Final Henry Paterson ran in a hat-trick of tries to lead the Aussie Sevens to their first Cup final victory over the All Blacks Sevens in 20 years.

That series of results saw the Blitzboks reclaim top spot in the Series standings with 124 points, two ahead of Australia on 122. Argentina are third with 118 points, while Fiji in fourth have 104 points.

This season, the best seven results will be used for the final Series standings, leaving the crown up for grabs ahead of the final event of the season in Los Angeles on 27-28 August.

New Zealand issued a strong response after being knocked out at the Pool stage for the first time ever in Toulouse last weekend, reaching the final before narrowly losing 19-14 in extra-time.

Fiji’s bronze, which they claimed after a thrilling 31-26 win over Samoa, saw them medal for a fourth consecutive tournament.

But it was another frustrating tournament for South Africa, winners of the first four tournaments of the season, who blew a 17-point lead to lose to Australia in the quarter-finals on a weekend where they had a chance to wrap up the Series title if results went their way.

More than 74,000 fans filled Twickenham Stadium over two days of action as the best players in the world put on a superb showcase of the speed, skill and drama of rugby sevens in London, which was the eighth and penultimate round of the HSBC World Rugby Sevens Series 2022.

The Series title is still up for grabs when the show rolls over to the USA for the final event of the season in Los Angeles, which takes place on August 27-28 at the Dignity Health Sports Park.

Australia won the women’s Series which concluded in Toulouse last weekend. Australia were the dominant team throughout the 2022 Series, showing great consistency to win four gold, one silver and one bronze medals from the six rounds of the competition.

This is a huge year for rugby sevens. Alongside the Series, the Commonwealth Games will take place in Birmingham, England on 29-31 July, and following the grand finale of the men’s Series in Los Angeles on 27-28 August, all eyes will turn to Cape Town, South Africa for what promises to be a record-breaking Rugby World Cup Sevens 2022 on 9-11 September.

Meanwhile the schedule for the 2023 HSBC World Rugby Sevens Series is due to be announced on Tuesday. Next year’s Series will carry the added significance of offering qualification to the top four men’s and women’s teams to the Olympic Games Paris 2024. – WORLD RUGBY