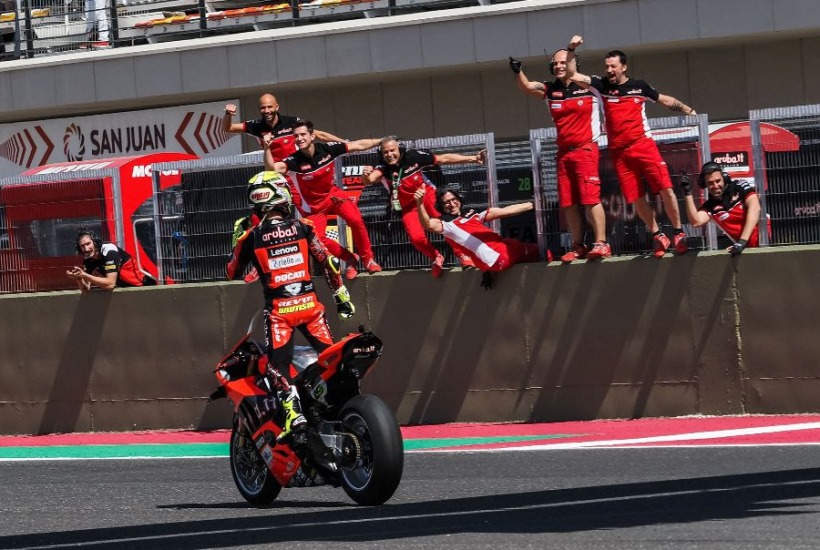 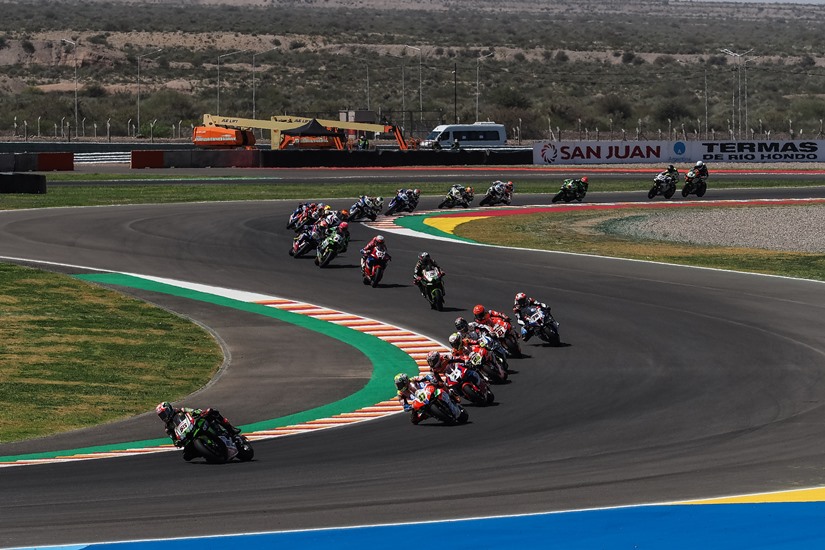 “Today I’m happy because I improved a lot the feeling with the bike from yesterday. I want to thank Ducati and all my team, they worked to give me a real good bike for today. Already this morning I felt really strong with the bike, on the pace. Also, in the Superpole, we did incredibly fast laps. I was so confident for the race because I knew I had a really good feeling and a very good pace. The important thing was the first lap, to not stay with a lot of riders and to not enter into a lot of fights and to not make mistakes. But in the first lap, I was leading the race. In the first corner I was really lucky because Toprak crashed in front of me. I don’t know if he touched my front tyre or it was my feeling, but he was really close and I was lucky to not crash with him. After that, I needed a couple of laps to analyse what was happening and unfortunately I just lost some positions, and I could stay with the front group. Then I saw that my pace could be a couple of tenths faster. So, I decided, without taking many risks, try to stay in front and have my reference. I was quite consistent during the race. I’m happy because we choose the SCX tyre and I think it was the best option because it worked really well. More than the victory, I’m happy with the feeling I recovered with the bike.”

“Axel started really well, his rhythm was quite strong in the beginning. When Alvaro came past, he capitalised on being able to pass Bassani quite easily. Then he had some free track to do his rhythm and he went away. I was stuck because I was stronger in some areas of the track and Axel was stronger in other areas. It was like a concertina effect. But then I settled for second, I understood today I could race for second. We were going away from Lecuona so it was more a race understanding where am I going to pass.  I tried a couple of times into the long chicane, but it didn’t really work. Axel would get the cut back. I put another move in the penultimate corner and it kind of worked. He came back and went wide and into Turn 1, from there, it was about doing my rhythm, try to go away, have some breathing room for the last lap. Not the win that I would dream of, but I feel like we could be really satisfied with effort.”

“It was an incredible race! I tried to stay at the front of the race. When Alvaro overtook me, I tried to stay with him but it wasn’t possible. I stayed with Jonny, but he’s a really good rider and has six World Championships. For me, it was incredible to battle with him. I tried to follow him. Today, it wasn’t possible for me because in the last laps I had a problem with the front tyre. I understood a lot of things because I’m young and Jonny, for me, is the king of WorldSBK. Battling with him is like a dream for me. But now I want to beat him!”

“Today was better than expected. The team told me that this was one of the worst tracks last year, it’s true that the bike changed, and also the riders… and honestly, I didn’t expect this result before the Superpole, before the race. It was a big surprise for the team and me, because it’s one of the worst tracks last year and also because it’s my first time here. We missed some time to adapt, to learn the track, and normally the best race is the second one. But it’s true that this weekend, I adapted quickly to the track. I feel good. I feel strong. Also, the tyre management was really good during the race. I felt drops in the last two or three laps, but I could manage all the race. I was a bit scared because Rinaldi was catching me, and then in the end I could manage the gap. I finish fourth and for me it’s like a victory.”

“It has been a difficult Friday for us, so we knew that we had to work hard this weekend. But this morning the feeling was much better than yesterday, so this was good. But we still missed something from the top guys. In the Superpole, my lap time was good, but everybody is so close, so I started in eighth position. The race was pretty consistent, but I had a really bad feeling with the bike. I couldn’t push and when I tried to push, I was slower and making mistakes. So, I just focused to try to avoid mistakes. My pace was ok overall. We finish fifth. For tomorrow, we’ll find something more to fight for the podium.”

“The Saturday was difficult. In the Superpole, on the last lap there were a yellow flag, I didn’t have time. I had a good pace all weekend and to be minimum on the first two rows, maybe on the front row because my qualifying are pretty good. Starting from ninth is quite tough cause there are a lot of fast bikes. The start of the race was hard, Vierge passed me on the straight, I was trying to pass Baz, it’s quite difficult when everyone has got a rhythm to race against. But honestly, after that my pace was quite good. I was slowly catching Rinaldi and Lecuona, but there were not enough laps. but the pace I had; I have to be happy. We’ll try again tomorrow.”

Toprak Razgatlioglu (Pata Yamaha with Brixx WorldSBK) crashed in the opening lap of Race 1 and managed to re-join the race to finish in 15th position. He remains second in the Championship standings with now only seven points between him and Rea for the second place in the standings.

Explaining the crash, Razgatlioglu said: “It was a big mistake for me. After two years, I think this is normal. The one time I make a mistake in the race. I’m very angry for this because it was the first lap. I tried to pass Bautista because he had a big advantage on the straight. For me, the race was very fast to the finish. I tried to come back again. The handlebar was not on the correct line. I take one point and it’s better than nothing. For me, it wasn’t a good day. We know that Bautista is very strong this weekend, and also in Australia. In Mandalika, I think he won’t have a big advantage because no long straights. Tomorrow, I will try again and fight for the win. I’m not thinking about the Championship because, for me, everything is finished. I’m just focussed race by race and I try for more wins this season.”

Local hero Leandro Mercado (MIE Racing Honda Team) was the first retirement of the race after the Argentinean rider had a Turn 14 crash on Lap 8. Mercado was taken to the medical centre for a check-up following the crash and was diagnosed with a left ankle sprain. He will undergo a medical review ahead of Warm Up.
WorldSBK action resumes on Sunday from 10:00 (Local Time) with the Warm-Up, followed by Tissot Superpole Race at 12:00 and Race 2 at 15:00.

Championship standings (after Race 1 – Round 10)