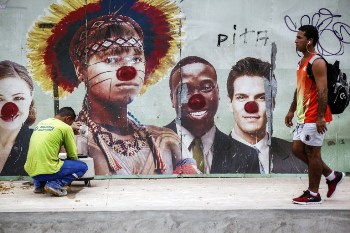 IFA said Friday that Brazil was working flat-out to deliver the World Cup on time but warned that much work lay ahead before the June 12 kick-off.

General Secretary of FIFA, Jerome Valcke, stressed there was still “a lot of work to do” after his latest trip to the host country that took in visits to three stadiums — Manaus, Brasilia and Porto Alegre.

“We are far beyond the normal speed limit you can have on the road and this will be the case until June,” Valcke said.

“We are working at full speed,” he said, after a board meeting of the Local Organizing Committee.

Valcke will return on March 24 to inspect three more stadiums — Fortaleza, Recife and Salvador — which were all used in last year’s Confederations Cup.

On Tuesday, Valcke dropped a threat to axe games at Curitiba stadium, where construction has been lagging but where FIFA has identified progress in recent weeks.

As well as Curitiba being spared exclusion — the venue will not be finally ready before mid-May — Valcke’s trip has also seen a financial agreement on more cash for stadium facilities in the southern city of Porto Alegre.

Looking beyond the stadiums, Valcke also stressed the importance of bringing transport links up to scratch in time for the event.

He also said FIFA hoped to persuade the northern city of Recife to drop a decision made on grounds of cost not to have a Fan Fest.

“This shows the huge anticipation for the 2014 FIFA World Cup in all corners of the world and that we can expect an incredible atmosphere at all matches in the stadiums in June and July,” said FIFA marketing director Thierry Weil.