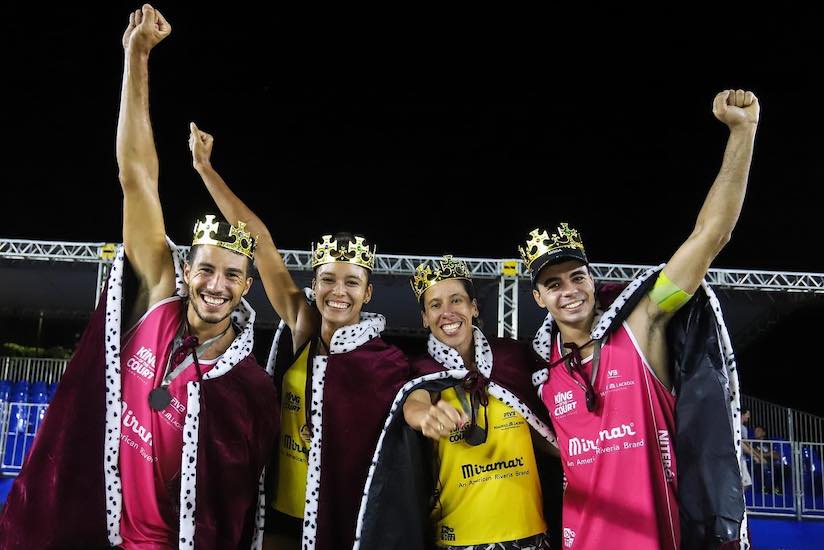 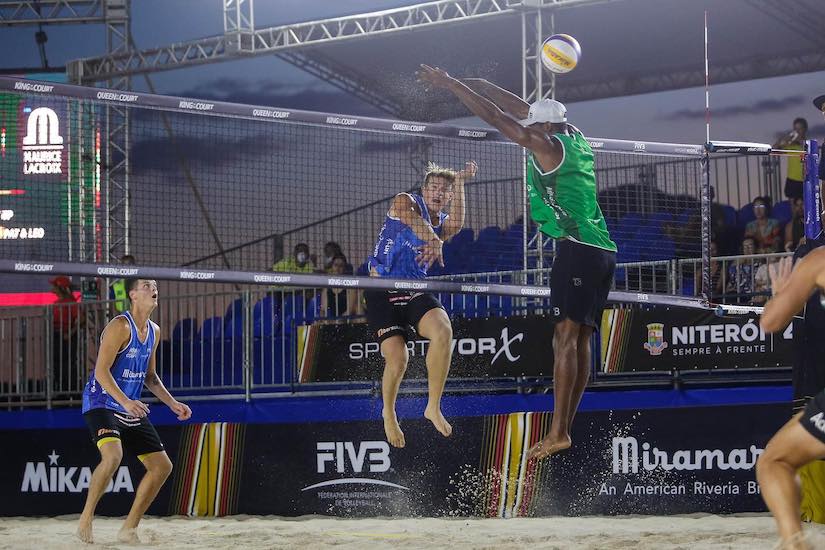 Taiana Lima and Hegeile Almeida Dos Santos have won the first-ever Queens titles in a South American King of the Court tournament. Their compatriots Guto Carvalhaes and Saymon Barbosa Santos secured the Kings crowns, making the event in Niterói, Rio de Janeiro a glorious premiere for Brazilian beach volleyball. The silver medals were won by Dutch and Chilean teams, the bronzes went to Brazil.

The tournament on Icaraí Beach was the first-ever King of the Court to be held on the southern hemisphere. The location was iconic, with Christ the Redeemer overseeing the stadium from across the Guanabara Bay. King of the Court followed the final of the Brazilian tour. Enthusiastic crowds came to watch the matches, a sold out house witnessed history as the first Brazilian crowns were won.

The men’s tournament started on Sunday evening with the quarterfinals. Fifteen teams fought for a chance at winning the crown, but only five were allowed entrance. Brazilian legends Bruno de Paula and Neilton Moisés won Tuesday’s playoff, which resulted in them earning the fifth spot in the all-important final.

Brazil had a great presence in the final, with next to Bruno/Moisés the teams of Gustavo Carvalhaes (Guto) and Saymon Barbosa Santos and Arthur Mariano with Adrielson Emanuel. They were met with fierce opposition from Chile (cousins Esteban and Marco Grimalt) and Uruguay (Hans Hannibal and Marco Cairús).

After losing the Uruguayans in the first round and Bruno/Moisés in the second the podium spots were contested by Guto/Saymon, Esteban and Marco Grimalt and Arthur/Adrielson. The latter pair drew blood first, putting four points on the board, but Guto and Saymon had other plans. They played an almost perfect defence, converting numerous spectacular plays into points. In the dying seconds they scored the fifteenth point, making them the first-ever Kings of Brazil. The Grimalts finished second, the bronze was for Arthur and Adrielson.

The women’s tournament also started on Sunday, with Dutch pair Brecht Piersma and Wies Bekhuis securing a spot in the final that evening. They had to wait until Tuesday evening for a second match, being the final. They met the winners of the other semifinal, Carolina Horta and Victoria Paranaguá (Tory) from Brazil and three teams who reached the final by earning their place in a thrilling playoff on Monday.

Taiana Lima and Hegeile Almeida Dos Santos were the most impressive of the teams in the first two rounds of the final, which saw Brazil’s Andressa/Victória and Argentina’s Fernanda Pereyra and Cecilia Peralta eliminated. Taiana and Hegeile had won the Brazilian tour on Sunday as well on Praia de Icaraí, they were in great shape.

In the final they quickly built a 12-point lead, leaving the Netherlands and Carol Horta/Tory fighting for silver. With over two minutes remaining Hegeile secured the win for her team,

Niterói, Rio de Janiero, was the third stop of the worldwide Crown Series 2022, after Hamburg and Utrecht. The Crown Series will be concluded January 11-14, when the Finals will be played in Doha, Qatar for the second year. Over the coming weeks we’ll present the contestants for the titles of Kings and Queens of 2022.