Home 2023 Carrefour renews its commitment as a main sponsor of La Vuelta and... 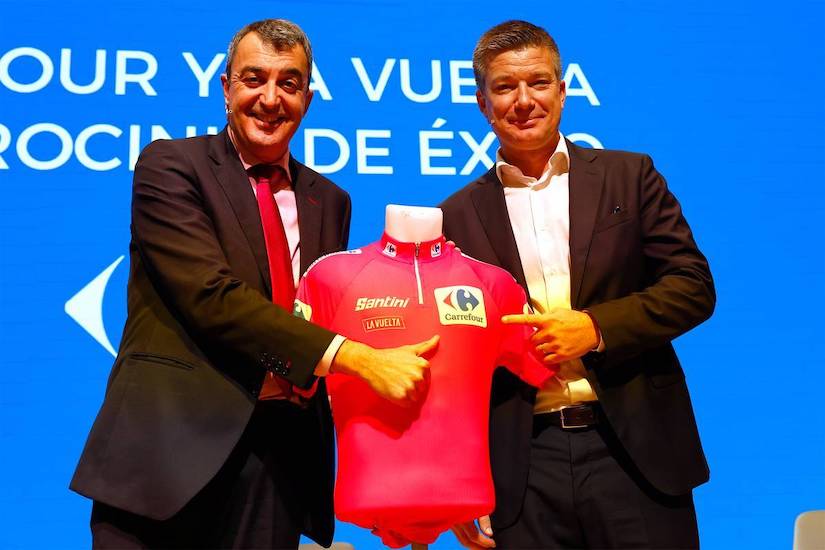 Carrefour and La Vuelta extend their alliance. Alexandre de Palmas, the Executive Director of Carrefour España and Javier Guillén, General Director of La Vuelta, have renewed the commitment between the distribution company and the cycling race, at an event attended by José Manuel Franco, the President of the Supreme Sports Council.

After supporting La Vuelta for ten years, Carrefour will continue to be the main sponsor of La Roja and will continue to sponsor the general classification leader’s jersey, a garment that represents sports leadership and has been worn by the likes of Vincenzo Nibali, Nairo Quintana, Chris Froome, Fabio Aru, Alberto Contador, Primoz Roglic and Remco Evenepoel, winner of the 2022 edition, among others.

New to the agreement, is the distribution company’s support for women’s cycling in Spain as it becomes the title sponsor of La Vuelta Femenina, which will have much more weight and relevance in 2023 and will be incorporating “by Carrefour.es” into its name. As is the case in the men’s race, Carrefour will also sponsor the leader’s jersey of La Vuelta Femenina. This initiative shows the company’s support for one of our country’s most important and inclusive sporting events, as well as Carrefour’s historic commitment to women and female talent.

The women’s edition, that will celebrate its ninth edition in the coming year with a completely renewed identity, will be held from the 1st to the 7th of May and will consist of 7 stages. Shelly Olds, Jolien D’Hoore, Ellen Van Dijk, Lisa Brennauer and Annemiek Van Vleuten have already added their names to the race winners list.

Alexandre de Palmas, the Executive Director of Carrefour España, pointed out that: “La Vuelta allows us to extol the very values that are our reason for being: closeness, competitiveness, sustainability, the promotion of healthy lifestyle habits, diversity, inclusion and equal opportunity for all. For this reason, during each edition over the past 10 years, we do our utmost to involve clients, partners and spectators in this competition. It is our honour to continue to support La Vuelta, and to also extend our support to women and to women’s sports.”

“Carrefour is already an essential part of La Vuelta. The identity of La Roja, and all of the values associated with the leader’s jersey, would not be what it is without Carrefour printed on its chest. This sponsorship renewal is doubly exciting for us as, a decade after it first sponsored the red jersey, Carrefour now extends its support by sponsoring the leader’s jersey for La Vuelta Femenina. This gives us security and a guarantee that allows us to project our work well into the future in order to make this race even bigger,” explained Javier Guillén, General Director of La Vuelta.

Carrefour has been the absolute protagonist of La Vuelta’s recent history, having sponsored the leader’s jersey in 10 out of the 13 occasions where the leader of the general classification has worn red. Throughout this past decade, the company has consolidated its role as a leading client-oriented company in the field of sports sponsorship, and its presence is a popular, dynamic and inclusive meeting point for consumers, partners and suppliers, alike.

In this sense, the distribution company continues to show its commitment to the local and regional economies. In the 2022 edition, Carrefour handed out over 4,000 free tasting samples of local products per stage in order to promote healthy eating habits and sustainability.

All of this is part of a 360-degree campaign to reinvent actions in order to entertain the entire family and, at the same time, push the economic development of local economies, while showcasing our country’s gastronomic, cultural and landscape wealth.