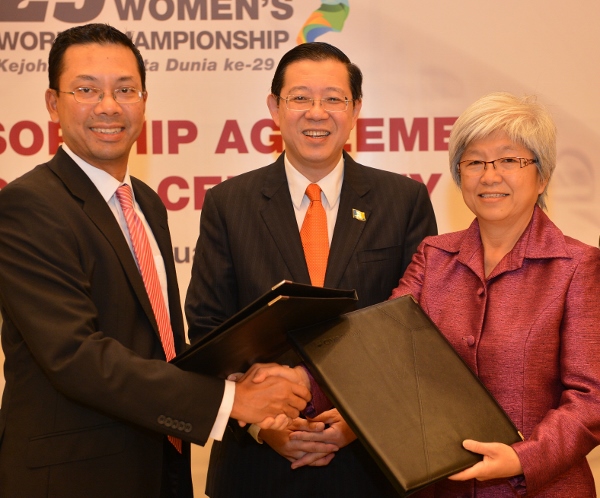 CIMB GROUP today announced they have signed on as the title sponsor of the 29th Women’s World Squash Championship in Penang.

Part of the Women’s Squash Association (WSA) World Series Platinum, the Penang-CIMB Women’s World Championship will take place at the Subterranean Penang International Conference and Exhibition Centre (SPICE) from Mar 14-23. The tournament field will be spearheaded by women’s world No. 1 Datuk Nicol David and will feature all of the top 10 players in the world.

A signing ceremony was held earlier between CIMB and the state government. CIMB were represented by Group Chief Marketing and Communications Officer, Effendy Shahul Hamid whilst Chong Eng, Penang State EXCO for Youth and Sports, Women, Family and Community Development, signed on behalf of the Penang government. The signing ceremony was witnessed by Chief Minister Lim Guan Eng.

At the ceremony, Lim said: “We’re excited the Women’s World Championship has returned after a brief break last year, and Penang has been given the opportunity to host this year.”

“Malaysia is well known as a host to many international sporting events, and this will certainly add one more to the list and boost the country as one of the world’s major tourist destinations, as well as promoting Visit Malaysia Year 2014. Penang is the perfect place to host an international event like this with great sporting facilities, amenities and infrastructure as well as the experience to organise a world championship. Besides, this will also be ideal for Nicol to defend her title on home ground,” Lim added.

Commenting on the sponsorship, Effendy said: “We are thrilled to be involved. CIMB are no strangers to the world of squash and it’s only natural for us to play a leading role in a World Championship event. Without a doubt, one of our most visible commercial programmes is being Nicol David’s main sponsor and we are excited she will be defending her world title.”

The tournament, which boasts a prize money of US$120,000 (RM394,000) will be organised by Nusmetro as the official event organiser.