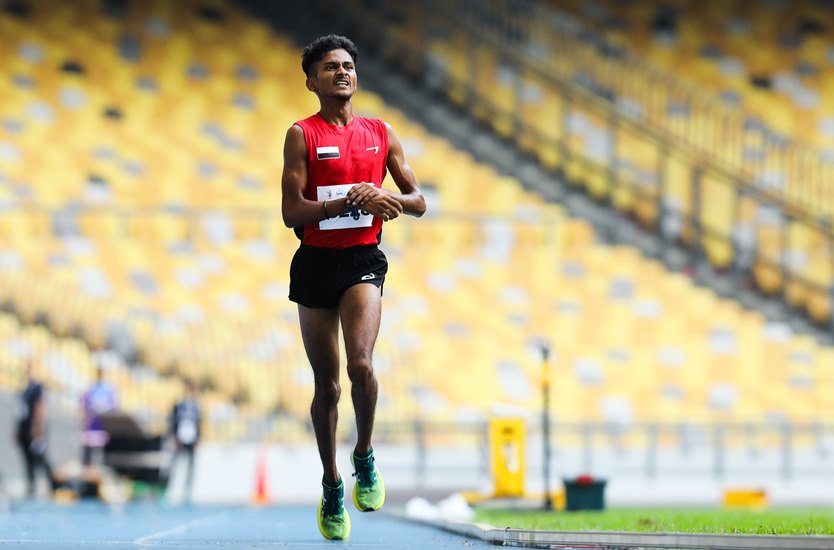 MUHAMMAD Ekbolasen Kamal Hussain is on a roll.

The Pahang athlete won his third gold medal in the 20th edition of the Malaysia Games at the National Stadium in Bukit Jalil today.

Ekbolasen, 18-year-old, clocked 14 minutes 52.05 seconds to win the 5,000m race and take home the honours of being among the best performers from the state in the Games.

This is the youngster’s third gold medal since the athletics events got off three days ago following his success in the 10,000m and 3,000m steeplechase.

“I’m totally thrilled. I won two gold medals and set my mind on the third. It was a difficult race as I had to keep pace with all riders until I broke away towards the end,” said Ekbolasen who trains full time in Raub.

“I very much hope to be given a chance to be drafted into the national junior team training programme and the opportunity of competing in international championships for the exposure,” he added.

He expressed his greatest appreciation and gratitude to Pahang AAA officials and his personal coach P. Subramanian was support and motivation two years ago.

Meanwhile, Subramaniam echoed that Ekbolasen is a talented athlete who will produce better results given the exposure at the international level.

“He needs to move up to the next level. I have been his coach for two years, and there is only so much I can do. He is highly dedicated and disciplined,” added Subramaniam.

Subramaniam added that training sessions are held twice a day and last for two hours in the mornings and evenings.