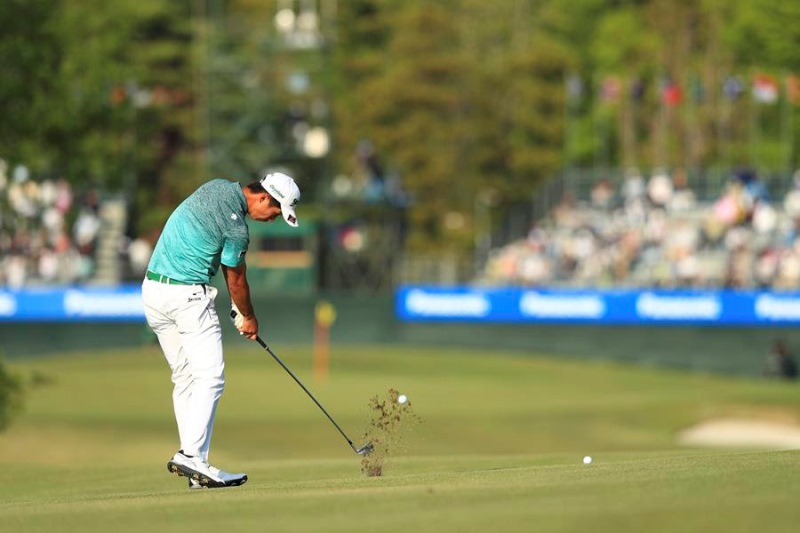 Japan’s Rikuya Hoshino held on to his overnight lead by posting a three-under-par 68 to stay in control at the Panasonic Open Golf Championship on Friday.

The 21-year-old will enjoy a two-shot cushion heading into the weekend rounds with his two-day total of 10-under-par 132 but has to be wary of a host of players bunched in tied-second place that features India’s Rahil Gangjee and Malaysia’s Ben Leong, who have emerged as the surprise package at the Ibaraki Country Club this week.

Thailand’s Jazz Janewattananond also made his move by grabbing a share of eighth place with another 68 while compatriot Rattanon Wannasrichan gave himself a reason to believe he can surmount a late challenge for the Panasonic Swing top prize by returning with a 67 for a tie of 11th place with American Sihwan Kim and the Japanese pair of Kodai Ichihara and Ryo Ishikawa.

Gangjee, who has not featured in the weekend rounds all year, sprung a surprise even on himself by marking his card with eight birdies at the JP¥150,000,000 (approx. US$1,370,000) event, sanctioned by the Asian Tour and Japan Golf Tour Organisation (JGTO).

The 39-year-old Indian posted the day’s lowest score of 65 to continue his dream run while Leong also kept his amazing run going by taking advantage of the benign weather conditions to stay close to Hoshino as the Malaysian chases his first Asian Tour win in a decade.

62 players progressed into the weekend rounds with the cut set at one-under.

·       Rikuya Hoshino is still searching for his first win on the JGTO. He has won once on the JGTO Challenge Tour in 2017.

·       Hoshino finished in 31st place on the JGTO money list last year and is playing at the Panasonic Open Golf Championship for the second time.

·       Rahil Gangjee has not made the cut in all three Asian Tour events he played in this year. He was forced to retire in his first two events in Singapore and Myanmar.

·       Ben Leong has missed the cuts in his last two events on the Asian Tour. He finished in 40th place on the Order of Merit last year

·       As an amateur, Ben dominated the Malaysian amateur circuit and spent several years in the United States on a government scholarship where he was attached to the David Leadbetter Golf Academy in Florida.

·       Ryosuke Kinoshita started playing golf when he was 10. His opening round of 65 yesterday is his best score on the JGTO.

·       Kinoshita is making the cut for the first time in 2018. He missed the cuts at the Leopalace21 Myanmar Open and Token Homemate Cup last week.

·       Jazz Janewattananond turned professional in 2011. He lost his Asian Tour card for the first time in his career after finishing outside top-60 on the 2016 Order of Merit.

·       Jazz bounced back with a breakthrough win in Bangladesh two months later before going on to claim seven top-10 results to finish a career-high ninth position on the Merit rankings last year.

·       Jazz finishing tied-fourth at the season opener in Singapore and earned for himself a coveted spot in The Open this July where he will make his Major debut.

·       Prior to the Panasonic Open Golf Championship, Rattanon Wannasrichan has never made the cut in Japan before.

·       Rattanon is ranked third on the Panasonic Swing series but still has a chance of taking home the top prize of US$70,000 if he wins the Panasonic Open Golf Championship.

I did not have much chances today. I felt like I was trying to save par all day. I birdied three of my last four holes which was nice. I like to finish strongly and go for that win. But I also have to try not to think too much about final result. I just have to play shot by shot. I will be aggressive if I have to and play conservatively if there is a need. I am gaining more distance and accuracy after playing on the JGTO for two years. But I hope to improve on the mental aspect of my game. I know the par-fives are reachable here so I will try to make sure I score there.

Fortunately the weather is great today which made scoring easier. I played well and made my fair share of putts. I’m surprised as I was not happy with the way I’m swinging the golf club coming into this week. I took some time early in the week to think and work on it. It’s paying off. My wife’s has been telling me to do what you do best and just go out there and have fun. No matter how I play, it’s definitely a blessing to welcome my baby boy into our lives and I’m looking forward to the weekend.

Today was like a dream round, considering I haven’t been playing that well for the last year and a half! I made a lot of putts and hit some decent shots too. I had no expectations. When I played my first practice round with Arjun, there were no birdies in nine holes so we were not expecting much from this golf course. I went out there and made eight birdies today, that was something. I’ve not been in this position for years and I guess I have to keep my tempo down as I’ve been going hard at it recently.

I tried to play to lower my score as much as possible today and told myself to just concentrate on my course management. I made good four consecutive birdies on 18, 1,2,3 and after that, I saw some photographers coming after me. I knew I could be in the lead then but tried not to think too much about it. I felt the conditions were harder than yesterday, but with less winds. I adopted a smart strategy today. Be aggressive when I can and go for the safe approach if the situation calls for it. So when the pin was in the corner, I aimed towards the centre of the green. My goal is not to shoot over-par during the weekend and be focus.

It was a totally different game I had today. I only managed to find one fairway with the driver today. I was hitting everywhere today and I was saved by my short game from a very terrible round. I’ll try to get my driving back on track and get back to the basics. I didn’t know how my game would be, especially coming off a five-week break. But the last two days have shown that even though my game is rusty, I can still produce some good scores. This will be the start of a six-week stretch of golf for me and it’s pretty good so far.

I started very well with a birdie in my first hole and did very well in my front-nine. I was a little shaky in my last three holes but overall it’s was okay and I’m happy. My goal at the start of the week was to make the cut. I’ve done it and this is the first time I’ve made the cut in Japan. I’ll then try to break into the top-five tomorrow and if I can do that, anything is possible.

Leading Scores after round 2 of the Panasonic Open Golf Championship being played at the par 71, 7343 Yards Ibaraki CC course (am – denotes amateur):