Home 2022 Korea’s Lee and Kim stay in the hunt as sizzling Rahm snatches... 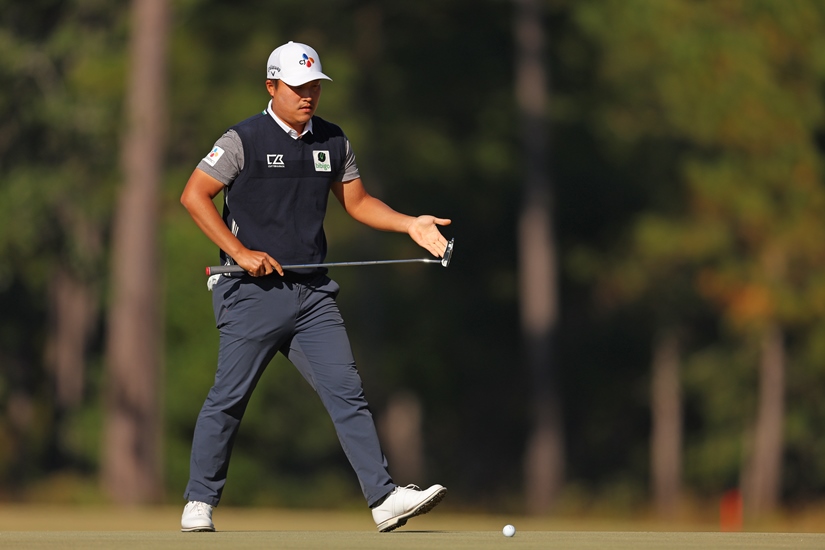 Korean duo Tom Kim and K.H. Lee stayed in contention at the halfway stage of THE CJ CUP at South Carolina as Spaniard Jon Rahm fired a sizzling course-record 9-under 62 to snatch the joint lead with Kurt Kitayama (65) of the U.S. on Friday.

Kim and Lee, who played together at the Presidents Cup last month, kept alive Korea’s hopes of delivering its first winner at THE CJ CUP following rounds of 69 and 67 respectively which put them in tied sixth place, four strokes behind the co-leaders who stand at 11-under.

Cam Davis of Australia and Aaron Wise of the U.S. share third place on 10-under following matching 66s, with Northern Irishman Rory McIlroy lying a further stroke back following a 67 as he chases the World No. 1 ranking this weekend.

THE CJ CUP was launched in 2017 as Korea’s lone PGA TOUR event but is being played in the U.S. for the third straight year due to the challenges of COVID-19. No Korean has won the tournament which Lee and Kim hope to end the drought.

Lee, who is a two-time PGA TOUR winner, hit seven birdies at Congaree Golf Club, but a bogey and a late double bogey kept him from being closer to the lead.

“I had good start. My driver was good which allowed me to have good round. Recently, my iron shot was not on the right spot. But today, the shots and distance, overall everything was right on point so I think I can climb up the leaderboard this weekend,” said Lee.

“I’m wearing a CJ hat and playing at THE CJ CUP and I want to win this tournament. I think I have a chance. I’m not feeling any pressure which is the funny thing,” added the 30-year-old, whose best finish in five appearances in the tournament was T25 last season.

The 20-year-old Kim, who has become an instant sensation on the PGA TOUR following two wins in his last five starts, made five birdies against a lone bogey where he played alongside McIlroy for the second successive day.

With a win this week, Kim, who is ranked 15th in the world, would become the youngest player to win three times on the PGA TOUR since 1900 (youngest: Gene Sarazen at 20 years, 5 months, 22 days).

McIlroy, a 22-time TOUR winner, was disappointed with an outward 37 before coming home with five birdies to stay on the leaders’ coattails. He can become World No. 1 for the ninth different time in his illustrious career where he needs either to win and have reigning No. 1 Scottie Scheffler finish worse than a two-way tie for second, or he can finish second as long as Scheffler finishes worse than 34th (out of a field of 78). Scheffler ended Friday in T31.

“I just felt like I didn’t take advantage of those first five holes only playing them in 1 under. Then once you turn for that tough stretch, 6 through 11 really, it was nice to birdie 10 and birdie 12 to get back to even par from after — basically just making up for the bogeys on the sixth and the eighth hole. And then after 12 I finished really well with a few birdies coming in,” said McIlroy, the reigning FedExCup Champion.

The story of the day belonged to Rahm, who won the Spanish Open on the DP World Tour a fortnight ago. Of his 10 birdies on the card, he holed out from the bunker on the eighth, rolled in a 35-footer on the 10th and then nearly holed out a 7-iron approach on the difficult 17th hole for one of his best birdies of the round.

“Today was a bit of a different story, it was much better off the tee, and with the irons, I felt better and was able to be a little more aggressive and give myself a lot of birdie looks and a lot of close ones,” he said.

“Right from the get-go my speed was good and felt confident and the rest of the game accompanied the putting.”