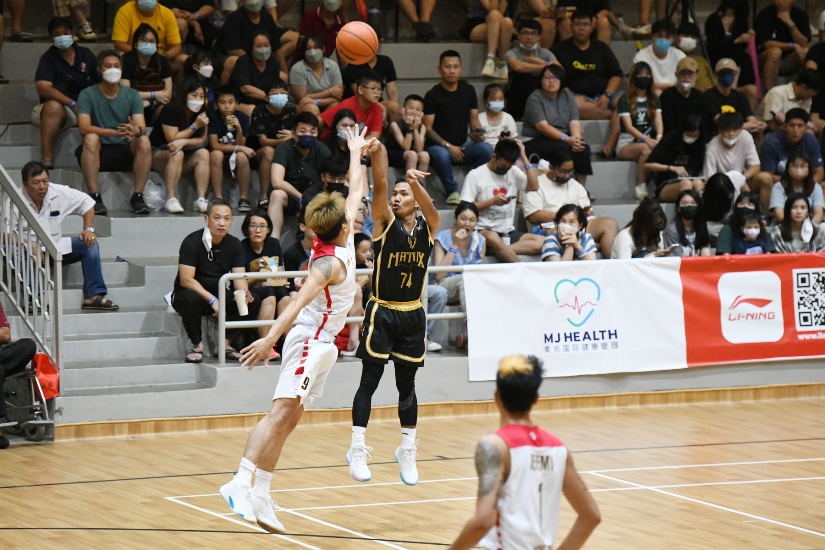 With Moses Morgan hanging onto the ball with six seconds on the clock, Jayson Lee stole the ball and raced down the court converting a buzzer-beating layup to send the game to overtime.

Unfortunately for Sunrise Youngsters, overtime was a Charles Garcia takeover with the big American scoring 16 points against the weary Jean-Luc Morel and Goh Yan Qing, making sure Adroit moved up to third, setting up a playoff clash with NS Matrix.

The Player Of The Game was the incredible Charles Garcia, dominating with 46 points, 17 rebounds and 8 assists. The MVP candidate scored 16 of his team’s 18 overtime points.

It was an all out effort from Sunrise Youngsters and their home crowd will be proud of their team’s fighting spirit. Jayson Lee’s 40 points is the most scored by a local player this season.

Charles Garcia’s record of 46 points only lasted for a couple of hours as an incredible 49 point performance from Head Coach/Player Jeff Viernes led the second ranked NS Matrix to a positive end to their regular season with a 118-86 pounding of Pegasus Sports.

NS Matrix finished with 23 threes, the most scored by any team in a single game. Jeff Viernes delivered a phenomenal 49 points, 12 rebounds and 5 assists. Jeff Viernes’s 12 threes was the most by any player in a game this season.

Pegasus ended their season bottom of the standings with a 2-8 record. Andrian Celada and Lee Jia Jun delivered 28 and 22 markers respectively.

It was a perfect end to the regular season for Johor Southern Tigers, defeating KL Aseel 91-76 for their seventh straight victory.

Collecting his eight Player Of The Game award this season, it’s no off days for Tevin Glass, doing it all for Tigers today with 26 points, 19 rebounds, 3 assists and 4 steals.
Johor Southern Tigers will take on the No.4 rank KL Aseel in Game 1 of a best of three series on Thursday, 8 December 2022 at MABA Stadium.