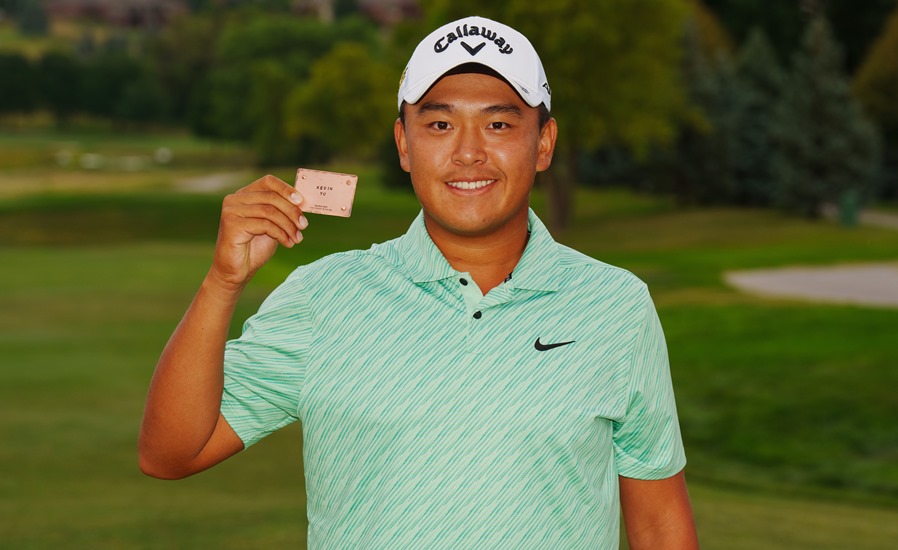 A tearful Kevin Yu of Chinese Taipei made it a record five Asian golfers to secure their dream PGA TOUR cards following the conclusion of the Korn Ferry Tour Regular Season at the Pinnacle Bank Championship on Sunday.

It was the perfect birthday gift for Yu, a former amateur star who turned 23 earlier in the week. Despite missing the halfway cut at The Club at Indian Creek in Nebraska, Yu safely finished in 20th position on the final Regular Season Eligibility Points List to join China’s Carl Yuan and Marty Zecheng Dou, and Korean duo Byeong Hun An and Seonghyeon Kim amongst the Top-25 who graduated to the PGA TOUR for next season. The quartet had secured TOUR bound status earlier in the year.

Yu joins close friend, C.T. Pan as the only other Chinese Taipei player in history to earn a PGA TOUR card via the Korn Ferry Tour. He earned two runners-up and a solo-third this season, which was his second year on Tour.

Following a decorated career at Arizona State University where he was ranked World Amateur No. 1, Yu earned status on the Korn Ferry Tour after finishing fourth in the inaugural PGA TOUR University Class of 2021. He made an immediate impression in the professional ranks by contending twice in his first four starts last season.

After watching a congratulatory video message from his ASU coach Matt Thurmond, Yu teared up.

“A lot of emotions right now. I went through a lot of stuff from college to now,” said Yu as he tried to hold back tears of joy. “I’ve been dreaming of this for a while … 20 years is a long time,” added Yu, who learned the game at a driving range his father owned in Chinese Taipei.

This is the first time a total of five Asian golfers have emerged from the Korn Ferry Tour’s Regular Season graduating class.

China’s Yuan concluded his campaign as No. 1 and the Dalian native is now looking forward to his first ever stint on the PGA TOUR. He is the third mainland Chinese after Dou and Xinjun Zhang, both in 2018, to hold a TOUR card.

“It’s going to be a new experience,” said Yuan. “New courses, new challenges … maybe pair up with some big names, learn from them. Everybody has contributed a lot, including my coach, wife, caddie, parents, friends. Everybody surrounding me, making me who I am. A big thank you to all of them that make me where I am now,” added the 25-year-old, who recorded three top-three finishes in his first five starts of 2022 and secured a win at the Chitimacha Louisiana Open presented by MISTRAS.

After finishing No. 4 on the final rankings, Dou earned a second crack at the PGA TOUR. Dou won the 2016 PGA TOUR Series-China Order of Merit at age 19 for Korn Ferry Tour membership and, along with countryman Zhang, became the first mainland Chinese golfers to secure a TOUR card with his 2017 AdventHealth Championship title.

Now age 25, Dou won his third Korn Ferry Tour title at this year’s The Ascendant presented by Blue to secure his return onto the world’s elite circuit. “It feels real now,” Dou said. “The first year I got there, I kind of felt I wasn’t ready. But it’s been three years now from that time, and I do feel like all parts of my game are set for the big TOUR.”

Kim and An finished No. 12 and 13 respectively on the final Korn Ferry Tour Regular Season Eligibility Points List to earn their PGA TOUR cards for next season. It proved to be a quick return to the PGA TOUR for An, who lost his card last season following four good seasons where he was regularly ranked in the world’s top-50.

The 23-year-old Kim advanced through First, Second and Final Stages of the Korn Ferry Tour Qualifying Tournament last fall to secure guaranteed starts on the number with a T39 at Final Stage. A four-time winner in Asia, with notable victories at the 2021 Japan PGA Championship and 2020 Korean PGA Championship, Kim recorded three top-three finishes in his first seven Korn Ferry Tour starts and clinched his first PGA TOUR card by early May.

Now based in Dallas, Texas, Kim counts eight-time TOUR winner K.J. Choi as a mentor and often play together in Fort Worth.

“When I first came here to compete on the Korn Ferry Tour, I promised myself I wanted to be consistent, and that consistency really paid off,” Kim said. “I think everything came down as planned. I’m surprised it all came quickly, but I know I worked hard on and off the course to be where I am,” Kim.

China’s Xinjun Zhang survived a nervous finish for a final round 68 and T16 position to qualify for the Korn Ferry Tour Finals, which is a three-tournament series starting later this week.

The top-75 players from the KFT rankings are eligible for the Finals and will be joined by players who finished 126th to 200th from the PGA TOUR’s FedExCup standings. The top-25 after three tournaments will also earn PGA TOUR cards.