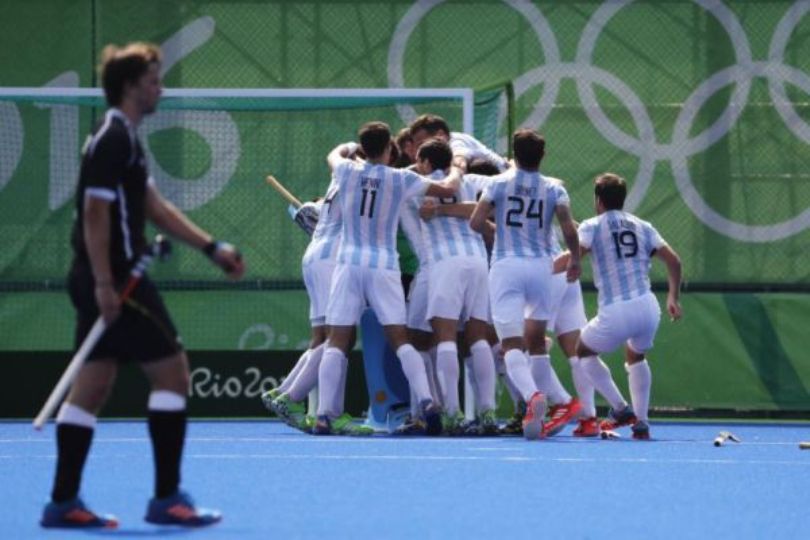 Men’s medal matches will be played on Thursday 18th August

The men’s hockey gold medal at Rio 2016 will be contested by two first time finalists in Argentina and Belgium, meaning that a brand new Olympic champion is now a certainty following an astonishing day of Semi-Finals action at the Deodoro Hockey Centre.
Beijing 2008 and London 2012 Olympic champions Germany saw their reign ended by Pan American champions Argentina, who claimed a superb 5-2 victory to upset the FIH Hero World Rankings. Belgium also turned the rankings upside down to claim their first ever Olympic final appearance by defeating European champions the Netherlands, the number two ranked team in world hockey.
The medal matches of the men’s Olympic hockey competition will take place on Thursday 18th August, with the Netherlands and Germany – the finallists from the London 2012 Olympic Games – fighting it out for bronze at 12:00 Brasilia Time (GMT / UTC -3). The gold medal match between Belgium and Argentina will get underway at 17:00.
Argentina (FIH Hero World Ranking: 7) sealed their first ever Olympic final appearance with a stunning 5-2 win over Germany (WR: 3). Los Leones were in sensational form throughout and thoroughly deserved their victory over Die Honamas, with the goals of brilliant penalty corner expert Gonzalo Peillat proving once again to be decisive.
Peillat scored three times from three attempts to give the clinical Argentineans a shock 3-0 lead over Germany ahead of half time, with Joaquin Menini and Lucas Vila netting open play strikes in the third and fourth quarters to send the Pan-American champions into dreamland.
Moritz Fürste and Christopher Rühr were both on target in the final ten minutes, but it was not enough to stop Germany’s quest for a third successive Olympic gold medal coming to an end. Argentina goalkeeper Juan Vivaldi was in magnificent form throughout the contest, making ten saves to guarantee Los Leones their first Olympic hockey medal and putting them one win away from becoming the first Pan-American winner of an Olympic hockey gold medal.
“It was our first Olympic Semi-Final ever and we were not thinking of the history”, said a delighted Lucas Vila after the match. “We were trying to be focused on today, and now we must do that again. We are in the final but we have to play like it’s a normal game and not feel the pressure of that.”
Another team who clearly did not feel the pressure of the occasion were Belgium (WR: 6), who were cool, calm and collected as they knocked out two times Olympic gold medallists the Netherlands (WR: 2). A cagey, goal-less first period was followed by three goals in four second quarter minutes just before half time.
Jerome Truyens lashed home a penalty corner rebound to put the Red Lions ahead before Belgium captain John-John Dohmen doubled the advantage from close range after great work from Cedric Charlier.
Mink van der Weerden reduced the deficit a minute before half time, but the result was put beyond all doubt by Florent van Aubel early in the fourth quarter, who guided the ball home after being perfectly supplied by the inspirational Thomas Briels to give Belgium one of the finest results in their history.
“It’s an historical night”, said John-John Dohmen, reflecting on the match. “It was a great game, amazing against Holland. I think we’ve never beaten them in an official tournament. Now we are doing the perfect tournament, the tournament for life and it’s at the right moment, at the Olympics.”
When asked his thoughts about the gold medal match opponents Argentina, Dohmen said: “They played a perfect game in the Semi-Finals. I think this is the two best teams for the moment, that are playing in the final. We never know what will happen in the final in the Olympics. In the past it was always really close. I watched on television all the finals. I watched in the past. Now I will play it. I can’t believe it.”
The Olympic hockey action continues on Wednesday 17th August with the women’s Semi-Finals taking centre stage. At 12:00 Brasilia Time (GMT / UTC -3), reigning Olympic champions the Netherlands (WR: 1) go head-to-head with European rivals Germany before Great Britain (WR: 7) and New Zealand (WR: 4) take to the field at 17:00 in a replay of the bronze medal match from the London 2012 Olympic Games.
The medal matches will take place on Friday (19th August), with the losing semi-finalists playing off for bronze at 12:00 before the gold medal game gets underway at 17:00.
Complete information about the hockey competitions at the Rio 2016 Olympic Games can be found on the official website: rio2016.com/en/hockey
The Olympic hockey events take place from 6-19 August at Rio’s purpose-built Deodoro Olympic Park, and will feature the 12 men’s and 12 women’s international teams that qualified through the Hockey World League and Continental Championships.
Tickets for both events are still available and can be purchased here