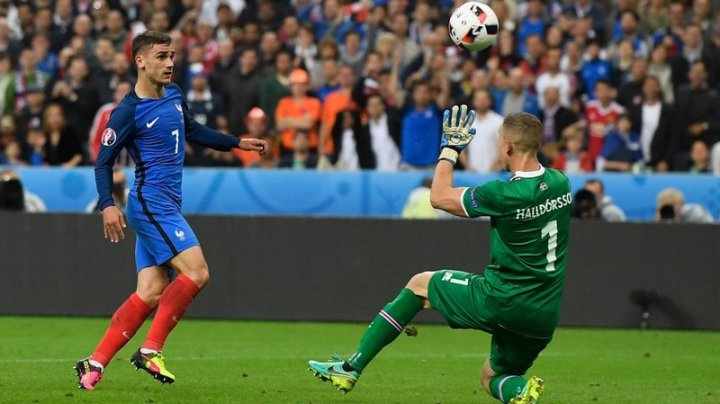 He boasts a Germanic name, Portuguese roots and learned his football in Spain, but France are counting on Antoine Griezmann’s loyalty to take them to a Euro 2016 triumph.

Going into Thursday’s semi-final with Germany, the 25-year-old Atletico Madrid striker is the tournament’s leading scorer with four goals.

With his strike in the 5-2 quarter-final win over Iceland, Griezmann became the first Frenchman since Michel Platini hit nine goals at Euro ’84 to hit four times at the tournament.

Despite being rejected by several French clubs because of his size, the cosmopolitan Griezmann does not hold grudges and now appears to be hitting his stride.

He made a slow start in a 2-1 opening victory over Romania but came off the bench to score a 90th minute goal in a 2-0 win over Albania.

After a scoreless draw with Switzerland, two Griezmann goals in three second-half minutes conquered a Republic of Ireland team given hope by Robbie Brady’s second-minute penalty.

That 2-1 win secured France’s passage to the quarter-finals, and a clash with an Iceland team that sent England’s stars packing.

Griezmann had a hande in three of the goals score by half-time when France led 4-0. His 20th minute corner saw Paul Pogba head France’s second.

Two minutes before half-time Griezmann set up Dmitri Payet for France’s third, and only two minutes later he pounced on Olivier Giroud’s through ball to beat Iceland goalkeeper Hannes Halldorsson with a sumptious chip.

Payet got down on bended knee so the Atletico striker could lift up his boot up for the West Ham playmaker to kiss it.

Fans cannot wait for the semi-final against Germany at Marseille’s Stade Velodrome.

“Griezmann is confirming that he’s one of the best strikers in Europe,” Yannick Stopyra, a former France striker and now the top scout for Ligue 1 side Bordeaux, told French sports daily L’Equipe.

“Contrary to Messi, for example, he defends a lot and, more importantly, tracks back to mark players.”

Despite his Spanish football upbringing, there is little point debating Griezmann’s patriotism. When he was 16, Griezmann, then at Real Sociedad, is said to have followed his hero Zinedine Zidane down the tunnel at half-time to ask for the Real Madrid midfielder’s shorts. Zidane walked off in just his pants.

The blue-eyed, blond haired Griezmann is ruthless on the pitch, and talks and acts like a Spaniard.

When he scored France’s leveller against the Irish, it was in Spanish that he screamed in celebration. And like some of his South American club teammates, Griezmann walks carries around a flask of the bitter-tasting, caffeine-infused tea mate.

Born in Alsace to a family with Portuguese roots, Griezmann was given a baptism of fire when he left France as a 13-year-old: learning the culture of Spain, and its football, in the Basque country.

Once rejected by French Ligue 1 side Lyon for being too small, Griezmann was salvaged by a scout for Spanish league side Sociedad, Eric Olhats, who moved him to Spain and took him under his wing.

In a Spanish league featuring some of the smallest, but most gifted players in Europe — Messi and Barcelona teammate Andres Iniesta to name but two — Griezmann’s 1.75 metre height was never a problem.

Griezmann made 200 appearances for Sociedad before joining Atletico for 30 million euros in 2014.