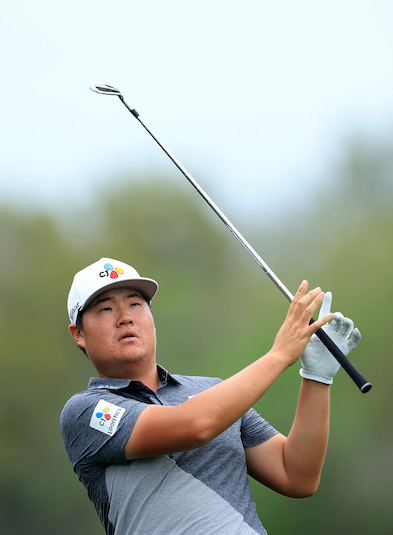 The Korean star showed plenty of steel to fight back from a disastrous start at the Masters Tournament on Saturday, battling to a gutsy 1-under 71 in the third round for solo third place and five back of leader Scottie Scheffler of the United States.

World No. 1 Scheffler, who has won three of his last five PGA TOUR events, carded a 71 and will take a three-shot lead into the final round over PLAYERS Championship winner, Cameron Smith of Australia who forced his way into the final pairing following a second 68 of the week.

With defending champion Hideki Matsuyama of Japan, who started the day in tied second place alongside Im, falling out of contention following a 77 on yet another brutal day at Augusta National, Im will now shoulder Asia’s charge of delivering a second successive Asian winner at the year’s first major.

“I still have a chance,” declared Im, who was one of only nine golfers who broke par Saturday.

It could have gone horribly wrong for the 24-year-old after he double bogeyed the first hole and three-putted the fifth and sixth holes to be 4-over early on. He knuckled down brilliantly to snare five birdies in his last 11 holes, holing  some massive putts from 16 feet on the 12th, 33 feet from off the green on 15 and another 15-footer on 17.

It was, however, a 26-foot par save on the seventh which proved pivotal for Im.

“I made a long par putt on the seventh and got some good momentum. It helped me finish with a decent score. At the first, I thought I had hit a good second shot but it sailed over the green with the wind, and I made double. The front nine was long. At that point, I was just thinking if I could get back to even par, I would still be in the top-10 for the final round,” said Im, who enjoyed a runner-up finish in his Masters debut in November 2020.

His courageous round has kept him in the frame to become only the third Asian male golfer after countryman Y.E. Yang (2009 PGA Championship) and Matsuyama to lift a major trophy.

He feels at home at revered Augusta National and duly delivered some big roars from the patrons following his lengthy putt on 15, which saw him celebrate with a raised clenched fist.

“I just wanted to putt it close to the pin (for par). I had a good line and the perfect speed, and it went in,” he smiled.

Im, ranked eighth on the FedExCup, knows he must produce the round of his life on Sunday if he is to put on the Green Jacket. He will play alongside former Open Championship winner Shane Lowry of Ireland in the penultimate pairing Sunday.

“I want to keep to my own play and focus on every single shot. That will be my strategy. If I need to be aggressive, I will go for it and if I need to go safe, I will go safe. I will choose my strategy depending on the situation. If it works out, I could have a good result.

“Winning the Masters would be great, but the pressure and an aggressive mindset could ruin my game. I will try to stay calm and focus. I’ll try to not look at other scores and keep to my own game until the 18th hole,” said Im.