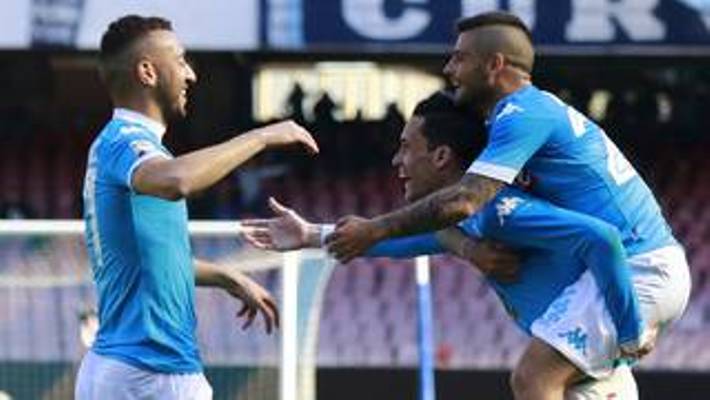 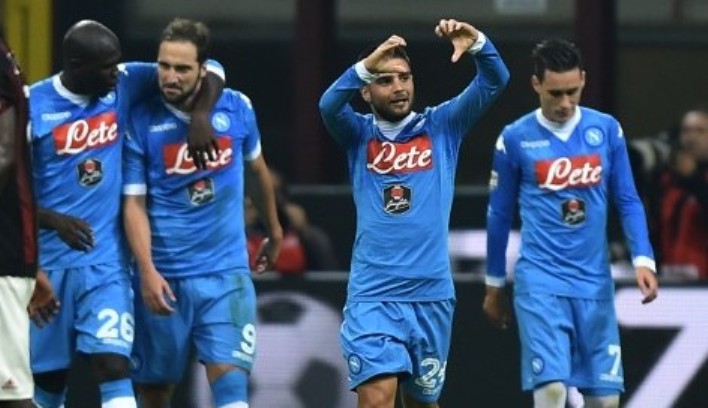 Dries Mertens scored a hat-trick and Manolo Gabbiadini notched a brace as Napoli kept their faint Serie A title hopes alive as Bologna were thrashed 6-0 on Tuesday.

David Lopez rounded off the scoring a minute form time with a fortuitous goal as his prod rebounded off Bologna goalkeeper Antonio Mirante, hit him in the chest and the bounced in.

Juventus could have won a fifth straight title with victory over Lazio on Wednesday had Napoli lost.

That would have given the Old Lady of Turin a 12 point lead with just four matches left, and as they have the edge on the southerners in head-to-head record, they would have been champions.

Instead, Napoli live to fight another day as Gabbiadini struck twice in the first half, cutting Juve’s lead, for 24 hours at least, to six points.

Gabbiadini fired home from the centre of the box from Mertens’s pass after just 10 minutes.

He doubled Napoli’s advantage form the penalty spot 10 minutes before the break after Kevin Constant had brought down Jose Callejon.

Any chance of a Bologna comeback was snuffed out just before the hour mark when Marek Hamsik teed up Mertens to fire home from the left side of the box.

Napoli, who after the game maintained their media boycott, added three more goals in the final 10 minutes.

Omar El Kaddouri teed up Mertens for his second and the Belgian scored his hat-trick two minutes from the end with a rasping drive into the top corner form outside the box.

Lopez had set up Mertens for his third and the Belgian winger returned the favour in the final minute.

“We played terribly, I’m the first one who’s responsible. I apologise to the fans and now I want the reaction of men,” he told Mediaset Premium.

What was most impressive about Napoli’s performance was the fact top scorer Gonzalo Higuain was still absent, sitting out the last of his three-game ban.

Gabbiadini proved an able understudy for the Argentine with Mertens’s second half showing particularly eye-catching.

The win moved Napoli eight points clear of third-placed Roma, who host Torino on Wednesday before entertaining Napoli next Monday.

That match could have a crucial bearing on which of the two joins Juventus in direct qualification for the Champions League group stages and which team must negotiate a potentially tricky play-off, providing Inter Milan or Fiorentina don’t make a late run for a top three berth. – Agence France-Presse